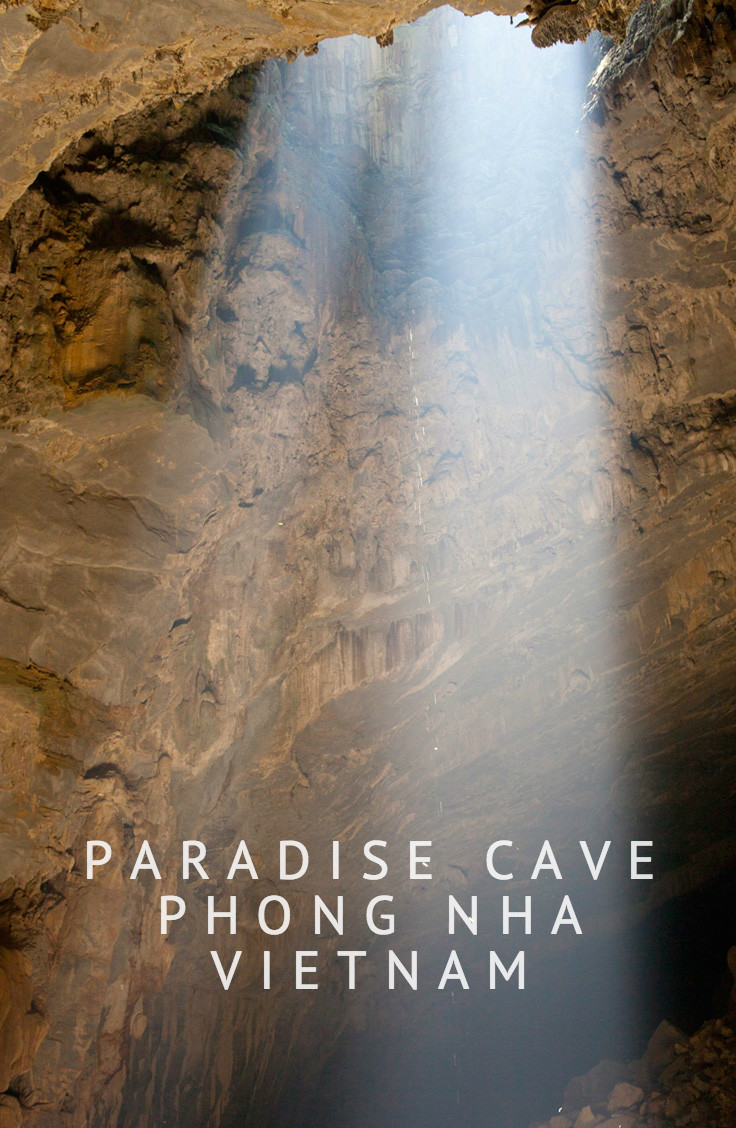 The 7-kilometer trek into the depths of the Thien Duong, better known as the Paradise Cave was one of the coolest adventures we’ve had. Ever. Not even in Vietnam, just ever – in life. We’ve done some cool stuff in our travels, but this was pick-your-jaw-off-the-floor astounding. And we aren’t even all that into caves. *it’s kind of hard to be into caves after traveling in SE Asia.* 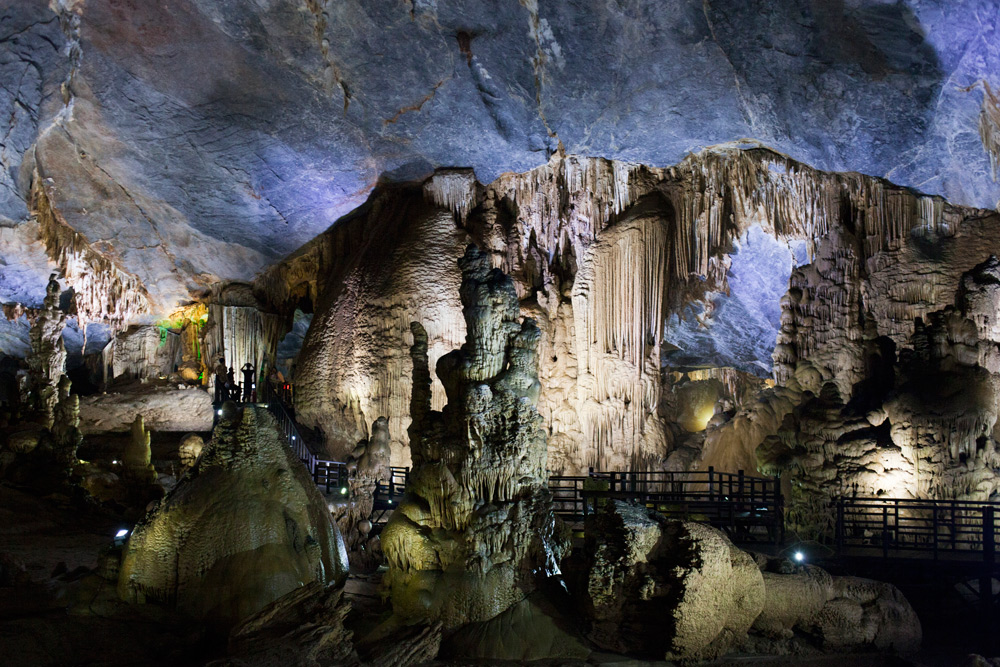 Can you spot the people and the wooden walkway? The scale of Paradise Cave is unbelievable. Phong Nha-Kẻ Bàng National Park, Vietnam.

But, we have mixed feelings about recommending the Phong Nha Tours. Two concerns: First, the price of the tour: at $125 a pop for a half day tour, we think it’s wildly overpriced for Vietnam. For comparison, a day with EasyRiders – which includes a personal guide, motorbike transport, and accommodation – costs just two thirds of the Phong Nha tour. Second, we aren’t quite sure if proper precaution and protection of fragile cave ecosystem is really taken into consideration by the operators. We aren’t scientists, but I am pretty sure touching and poking of stalagmites and stalactites isn’t terribly good for the rock formations that take thousands of years to form. 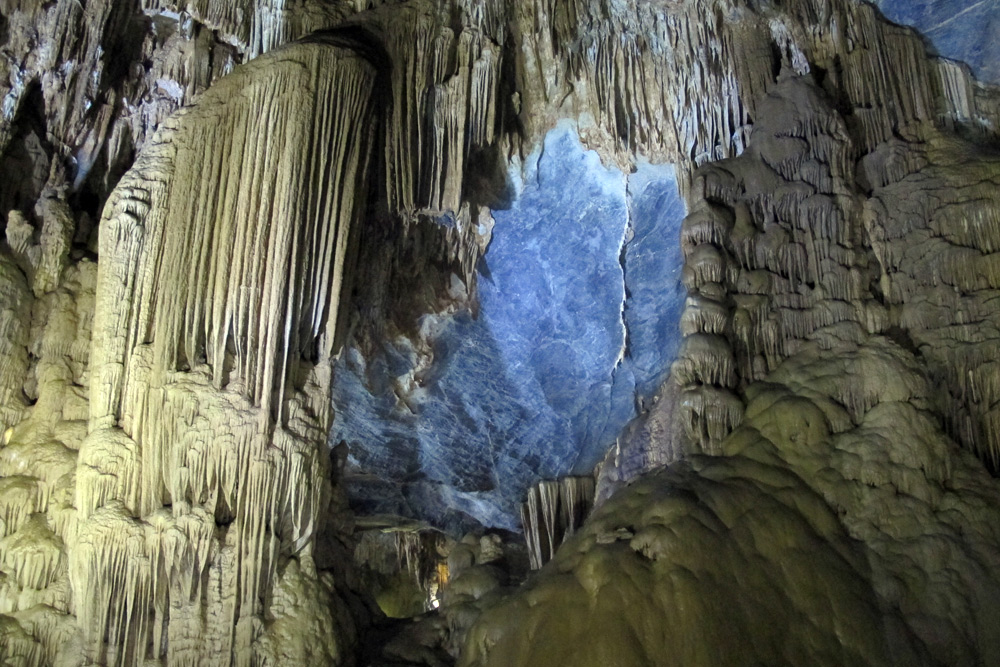 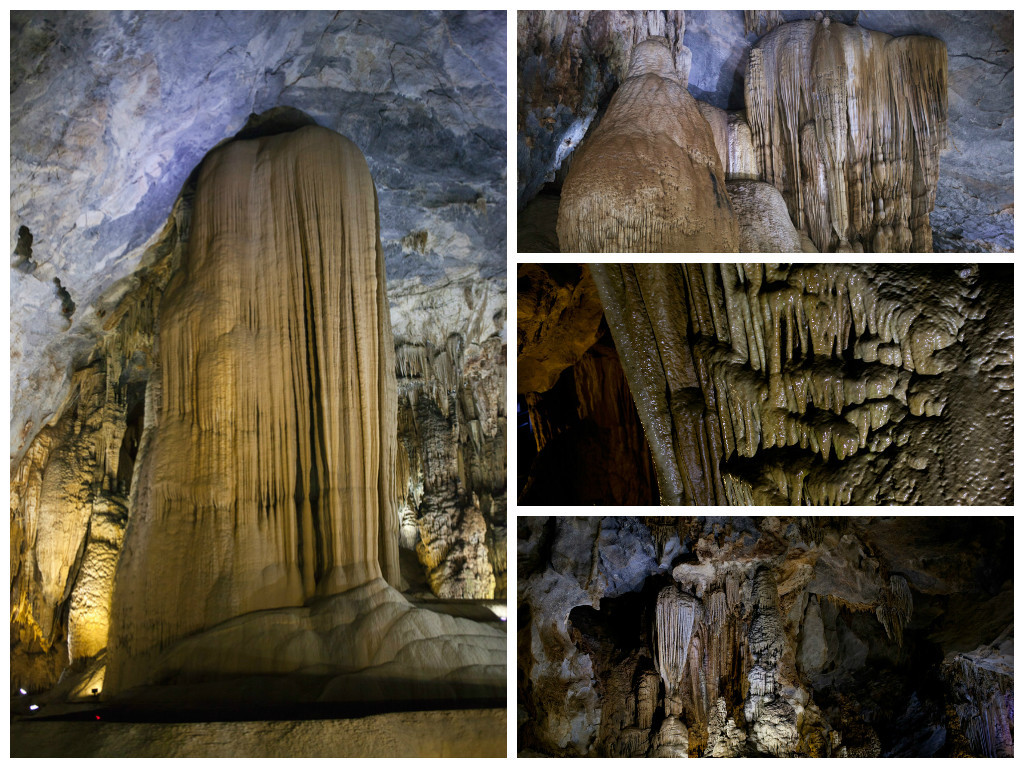 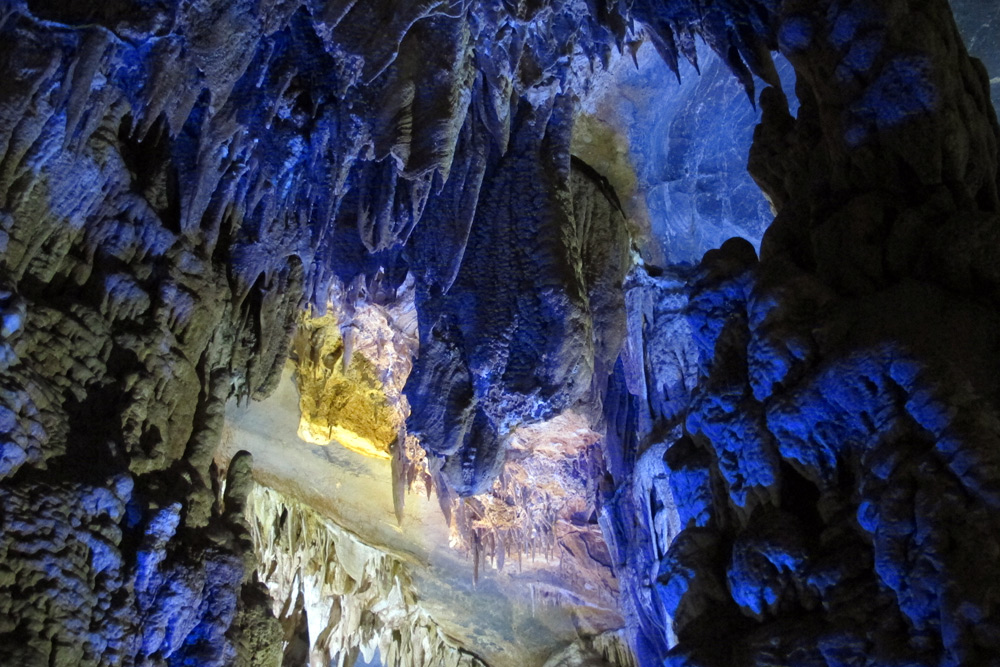 That said leaving behind hordes of tourists who’ve come to pay homage to the Paradise Cave, to be part of only a handful of people who get to venture into the depths of the cave – no special lighting installations, no handrails, and an unbelievable sense of not knowing what lays just a few feet ahead – was absolutely surreal. I am not sure if its possible to do this anywhere else in the world, but something tells me that that is pretty unlikely. 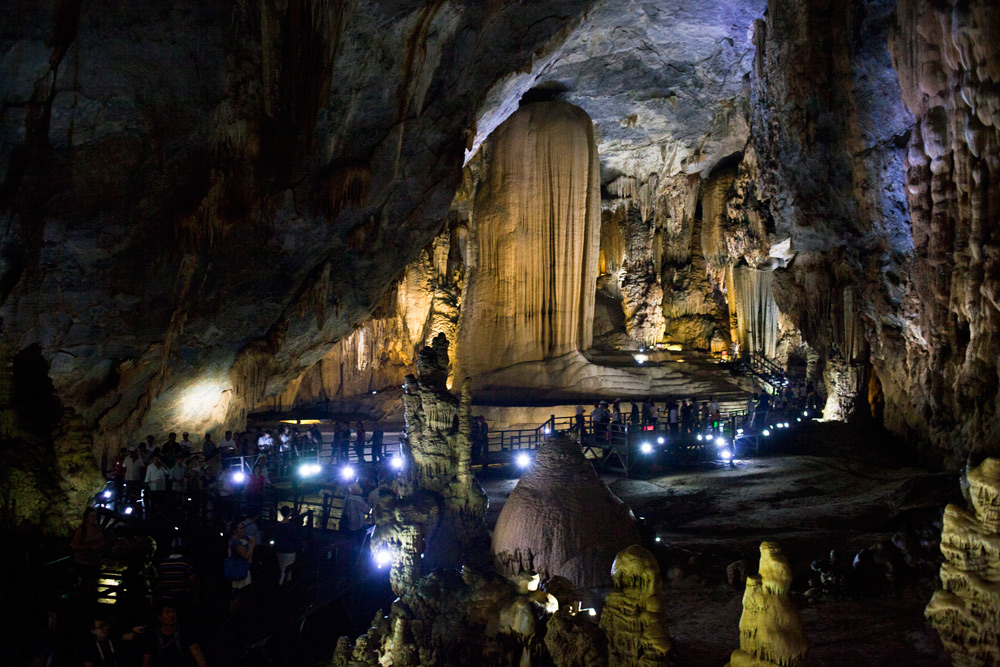 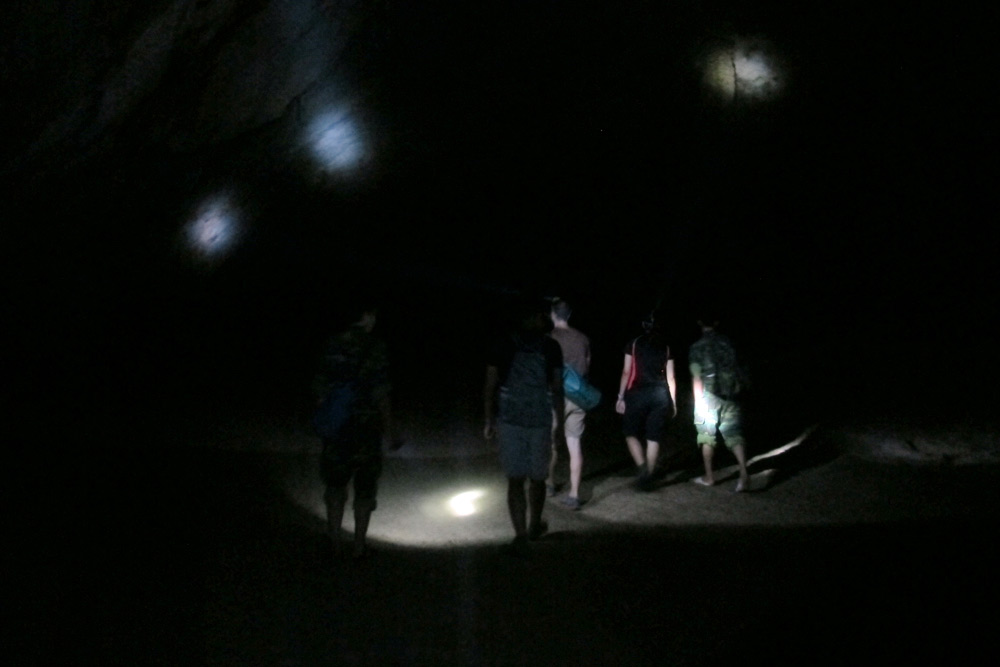 We were part of a 6 person group who got to explore an additional 3.5 kilometers of Paradise Cave in the dark. Phong Nha-Kẻ Bàng National Park, Vietnam.

Paradise cave is amongst a string of roughly 150 caves in Phong Nha-Kẻ Bàng National Park, a UNESCO World Heritage Site. A large portion of these caves has yet to be explored, and is closed off to the public. In 2009 a team of British surveyors declared Hang Son Duong –also in the Phong Nha-Kẻ Bàng National Park – to be the world’s biggest cave. If you would like to venture to Hang Son Duong you will have to get on the waitlist, which will allow you enough time to save up the $3000 admission price.  National Geographic did a story on that tour, and it certainly sounds pretty epic. 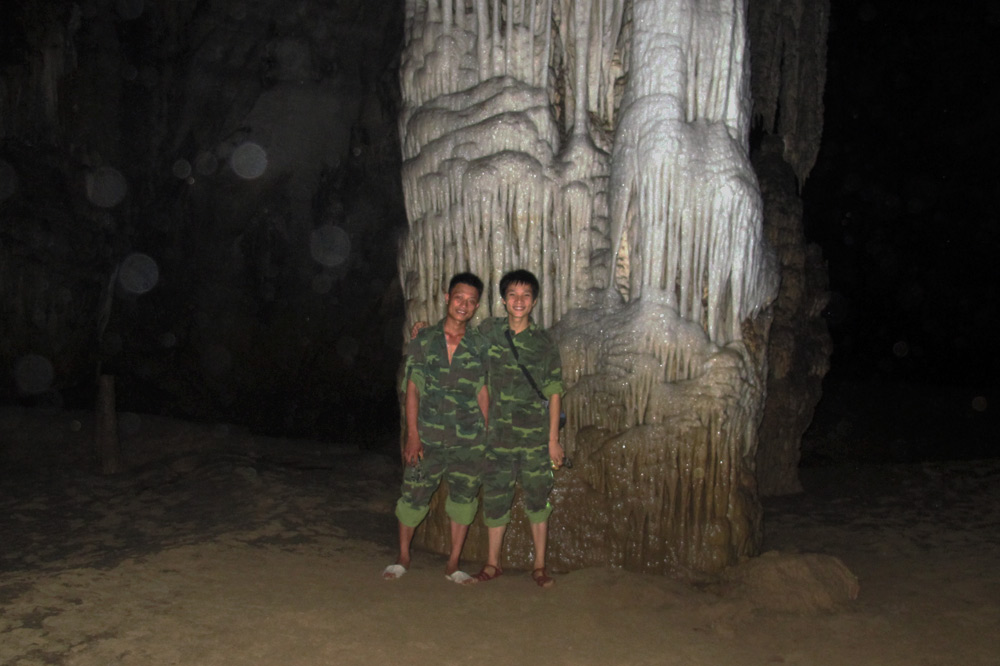 Our guide and porter who took us into the depths of Paradise Cave. Phong Nha-Kẻ Bàng National Park, Vietnam.

Thien Duong / Paradise Cave, discovered in 2005, might not hold any world records when it comes to being the worlds biggest, deepest, or most extensive — but, it is certainly no slouch in the world of awesomeness and beauty. Paradise Cave stretches just over 31 kilometers, with about one kilometer being open to the general public, for a relatively small admission price. The Phong Nha Farmstay Tours offers to take you an additional 3.5 kilometers, to the spot that is about as close to Paradise as I have even seen. 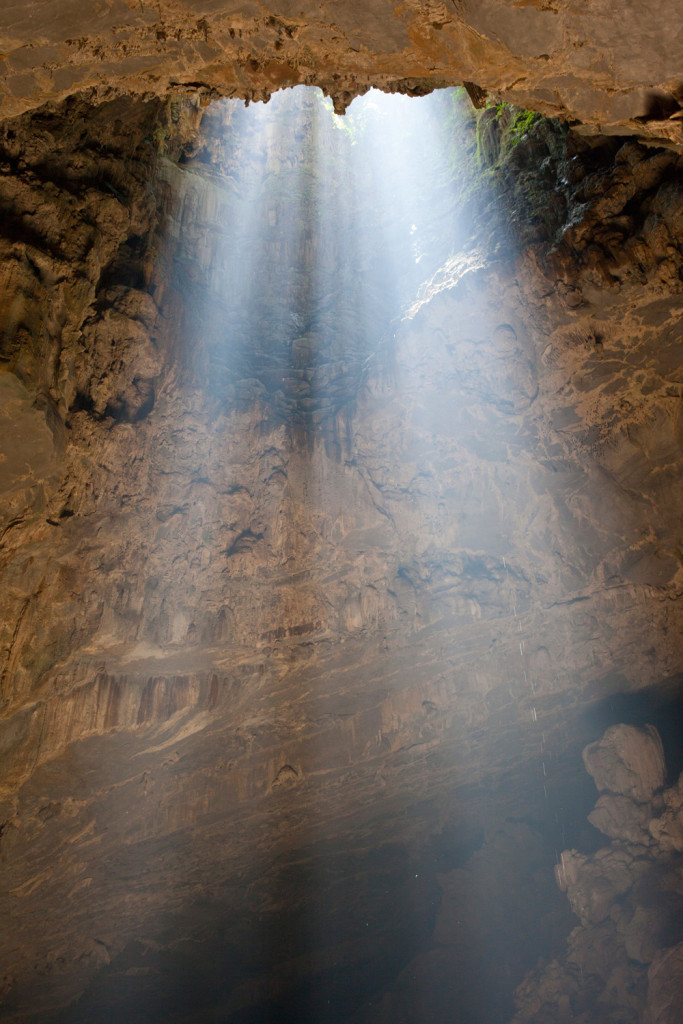 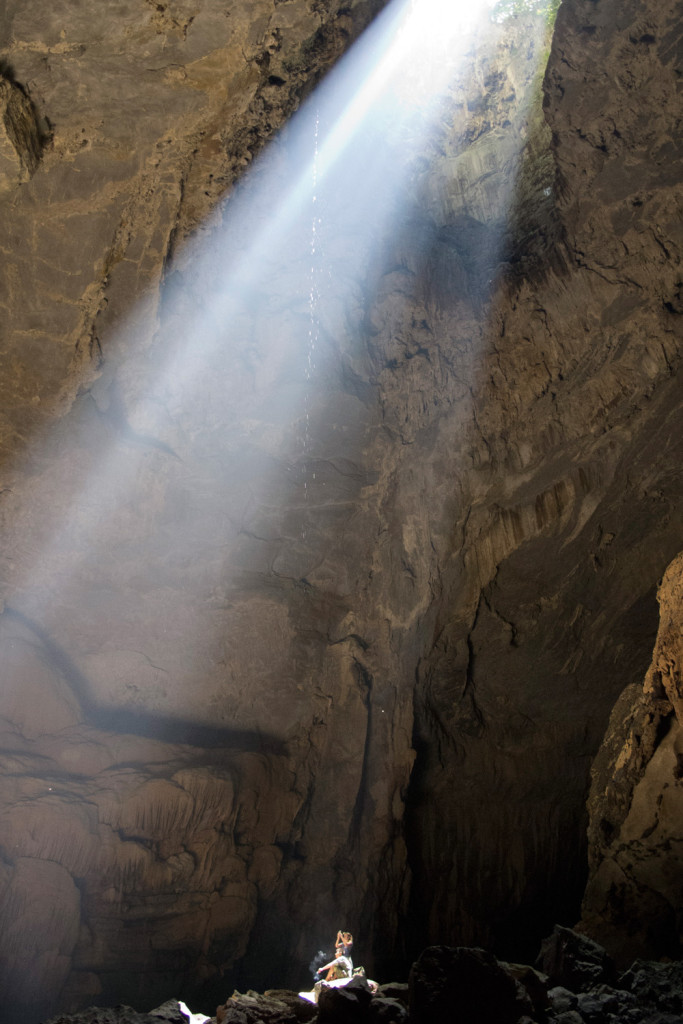 Those six kilometers (there and back) will absolutely make you work for it. For the most part the trek is walkable on uneven and rough terrain. I’ve never been to the moon, but this is what I imagine the celestial body to look / feel like. There were several instances where we had to climb, jump, and fjord underground creeks. We also took a boat for a stretch, which we had to push for a bit due to shallow parts of the underground river. It was physically demanding, and unbelievably fun. 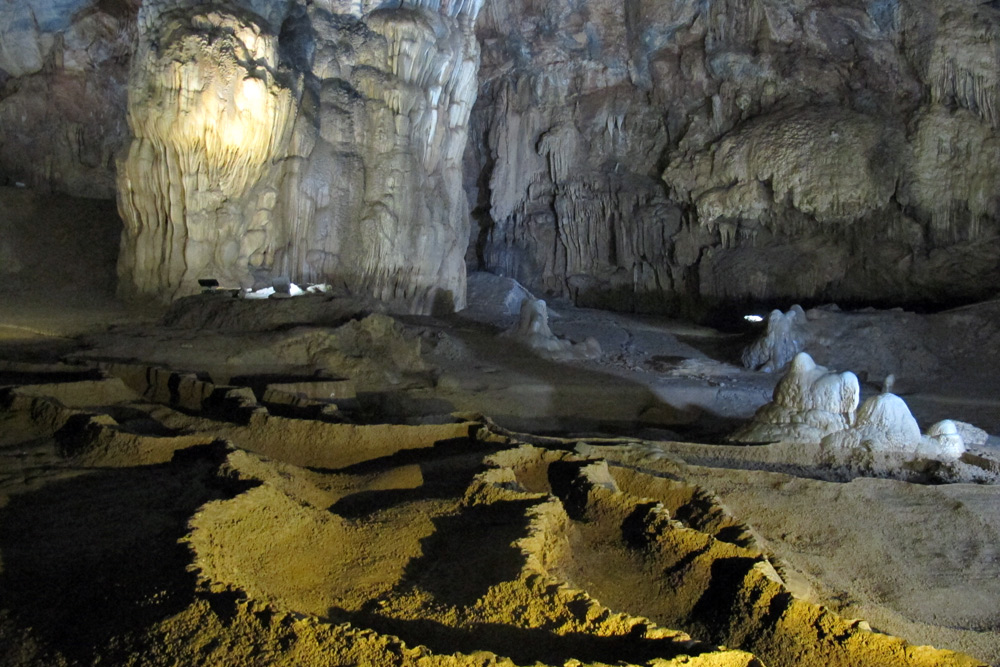 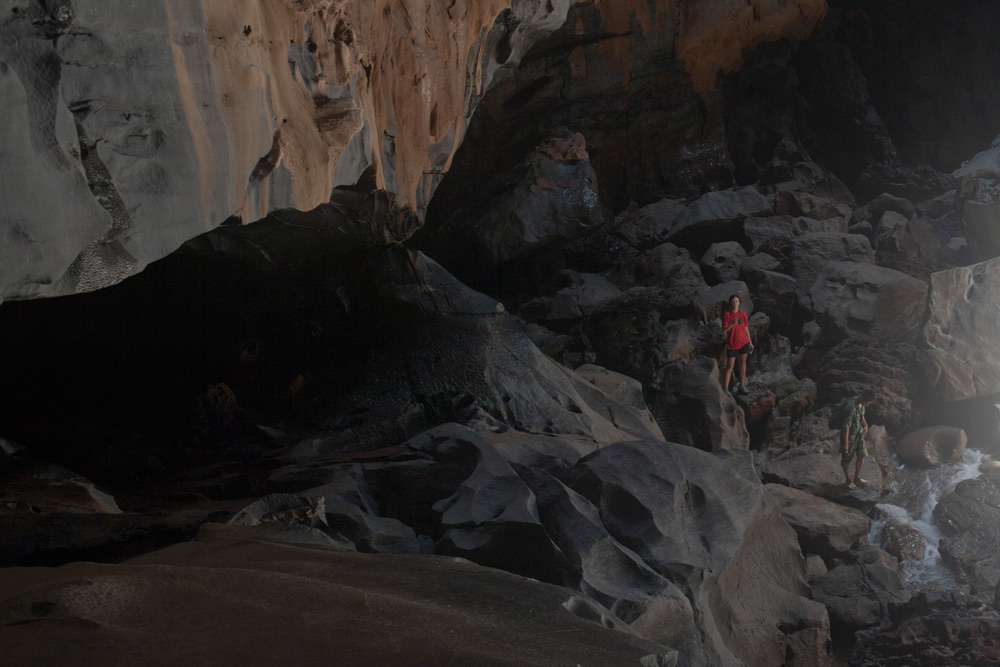 Don’t these craters in the Paradise Cave look just like the moon to you?! Phong Nha-Kẻ Bàng National Park, Vietnam.

Arriving at an open area with a giant opening at the peak of the cave with sunlight streaming in was absolutely dreamlike. I am pretty sure that the vastness of proportions, the spellbinding sunlight, and the realization of nature’s awesomeness at that very moment caused me to loose my breath for a few moments right there.

There is an option to swim in the underground lake, but since its fairly chilly in the cave we passed (also the thought of having to make the trek back all wet and cold from the swim wasn’t super appealing). But relaxing on the spot was definitely more than enough. The tour includes a Vietnamese lunch, which was very welcome after several hours of trekking through the cave. 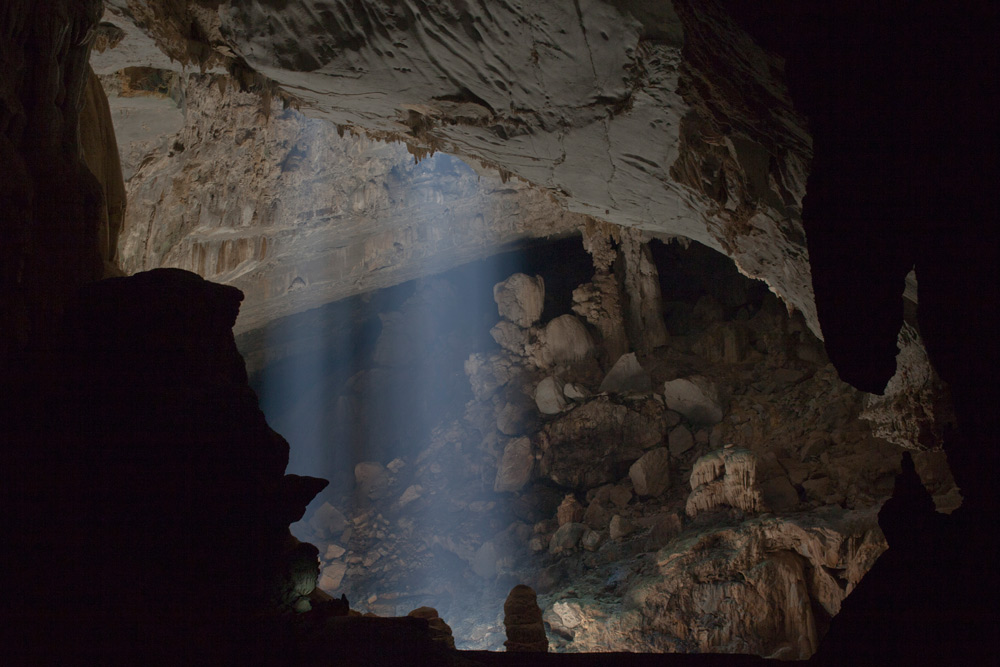 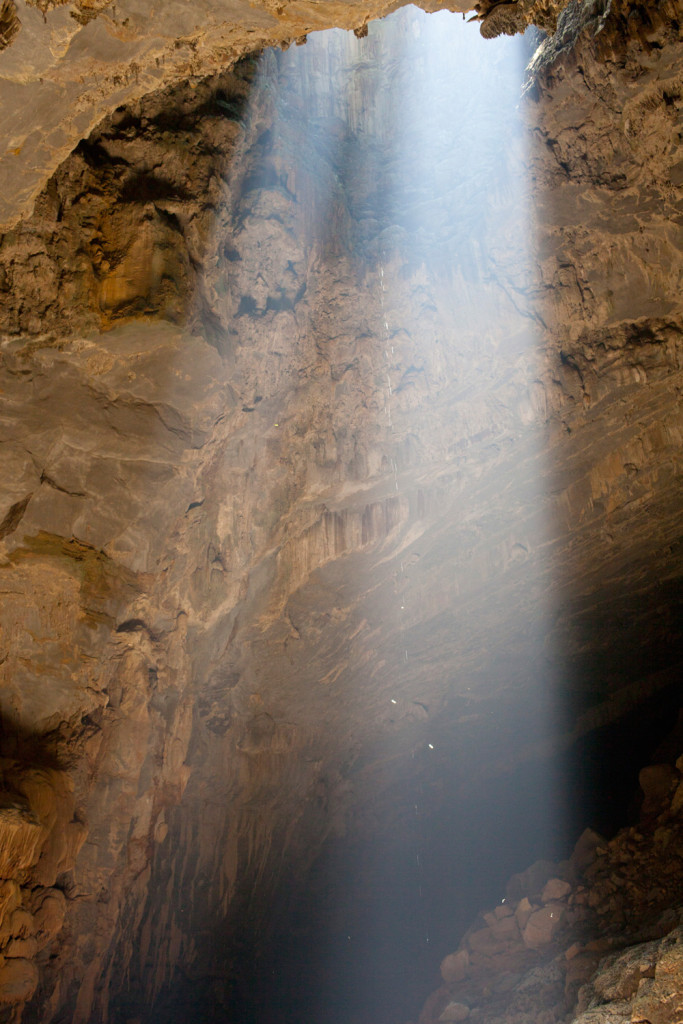 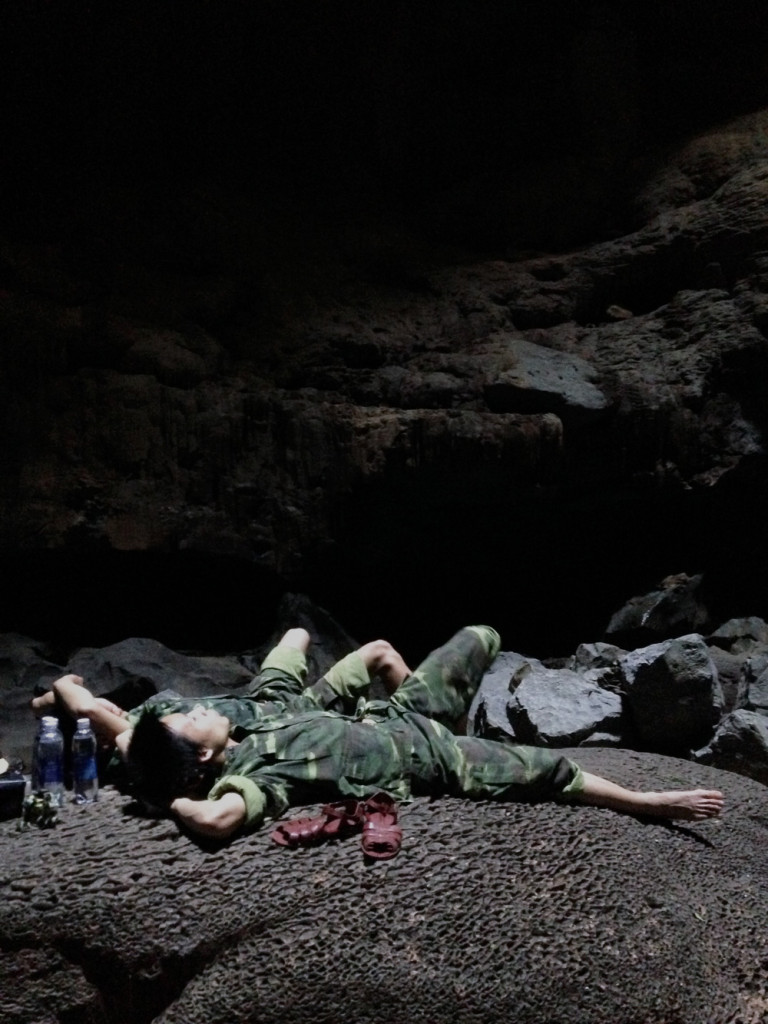 All in all –
Was it fantastic? Yes.
Do we think it’s worth the price? Unsure.
In hindsight would we still do it? Probably.

If you are still on the fence – maybe this video that we shot in the Paradise Cave will help you decide.

But I wouldn’t feel bad about skipping out on this in favor of exploring the area on your own – Be My Travel Muse has an excellent account of her adventures in Phong Nha-Kẻ Bàng National Park. 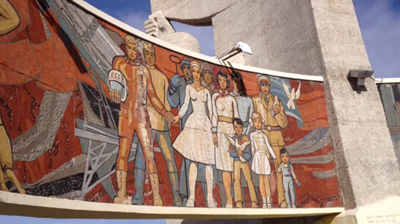 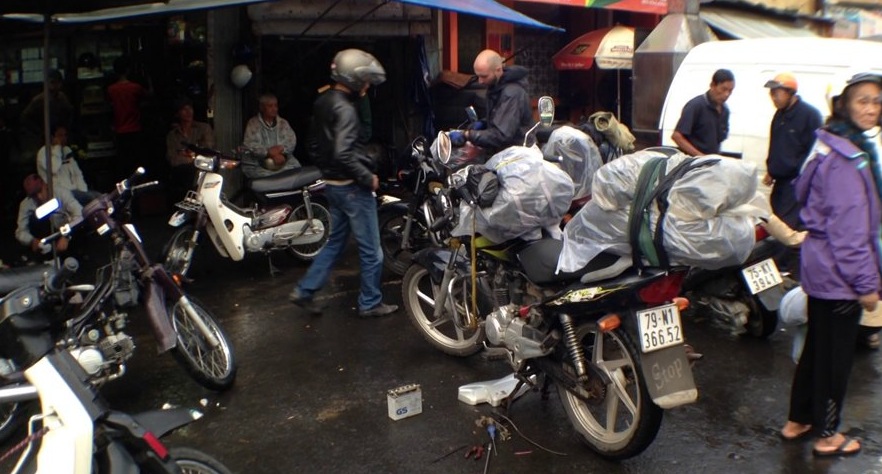