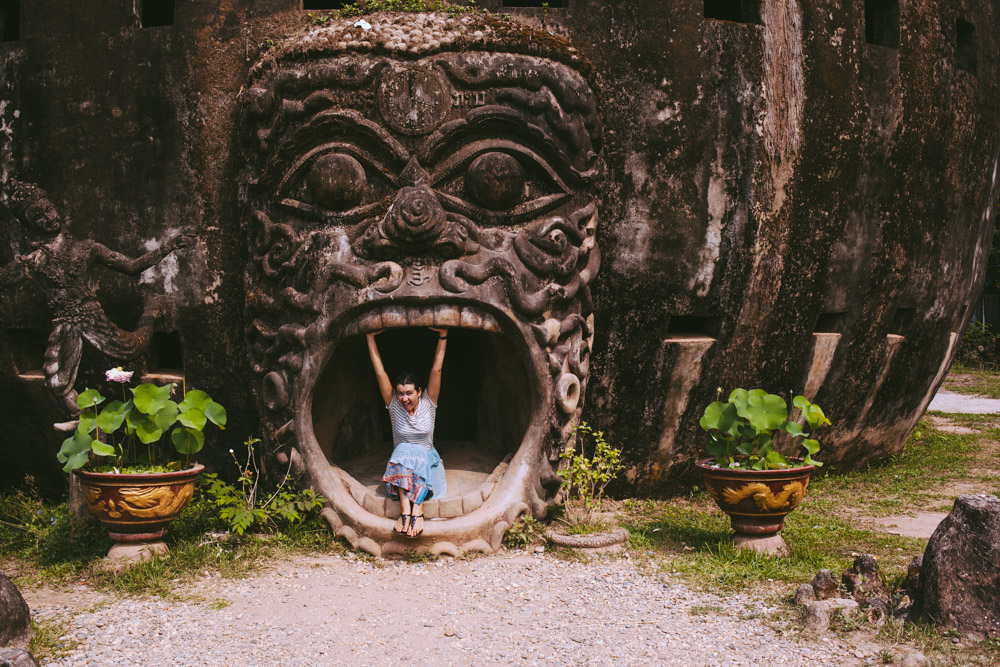 Ok, you might have heard that Vientiane, Laos is unremarkable, boring, skippable, meh of a town in the middle of Laos. It’s true to a degree – Vientiane doesn’t quite have the buzzing energy and hipster cafes of Hanoi, nor the shiny skyscrapers, skyline trains, and crazy nightlife of Bangkok. There is no great shopping or important sites to visit like in Phnom Penh. 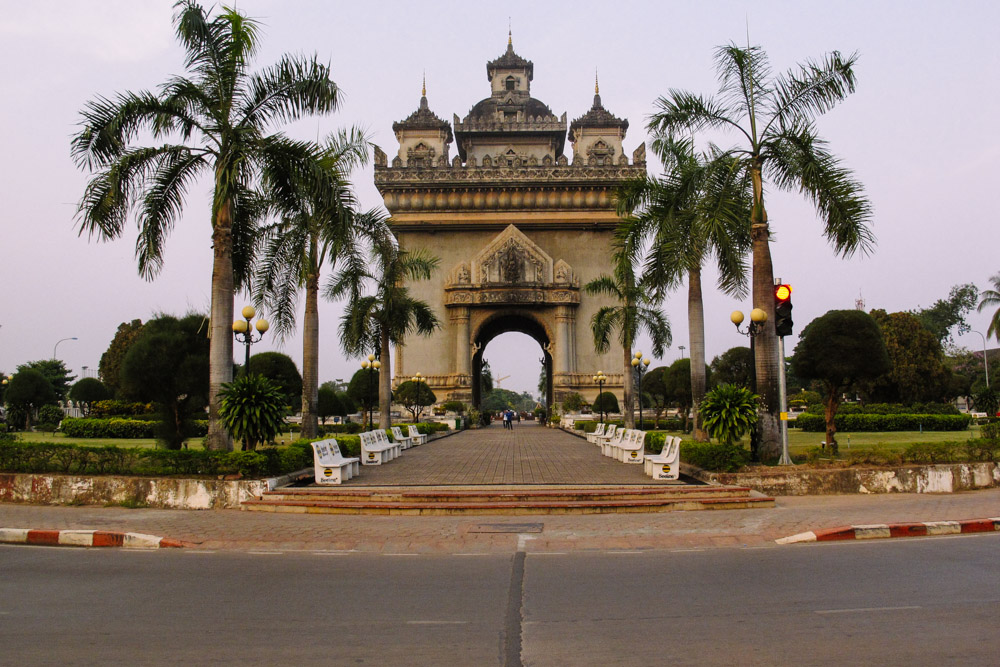 Patuxai Gate – translates as Victory Gate – was constructed in the 1960s from concrete initially earmarked for building an airport. Vientiane, Laos.

But guess what: Vientiane is just Lao version of “big city living.” Spending almost a month traversing Laos south to north, we’ve never seen anyone in a hurry, pressed for time, or hustling – but we did see plenty of people hanging out, enjoying a beer lao and hammock time in the shade, and passing on those tourist dollars because they simply wanted to take a nap. That’s the Lao way – why would Vientiane be any different from the rest of this mellow country? 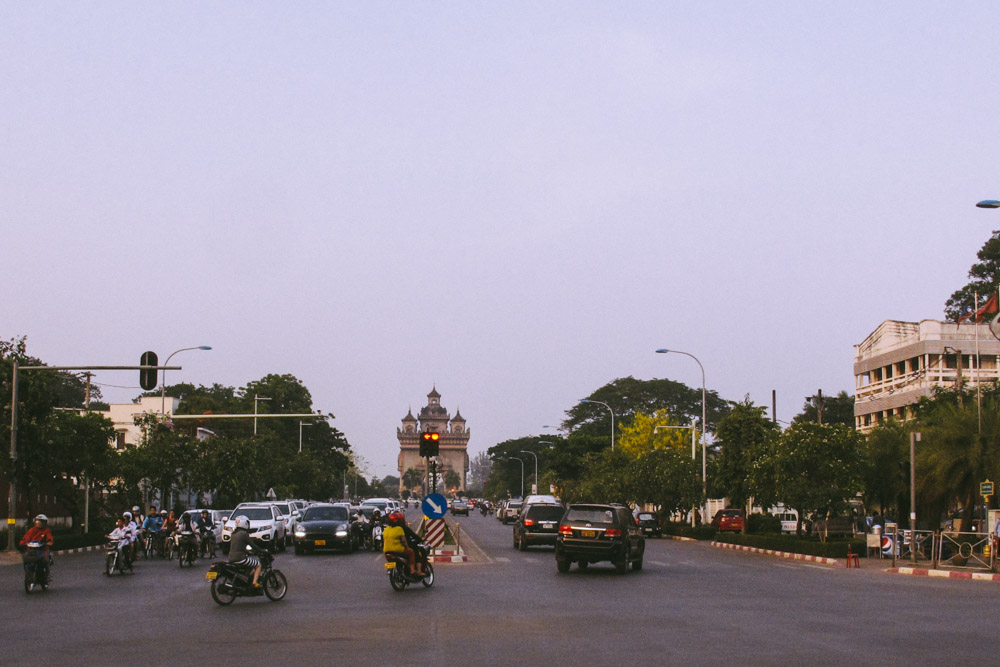 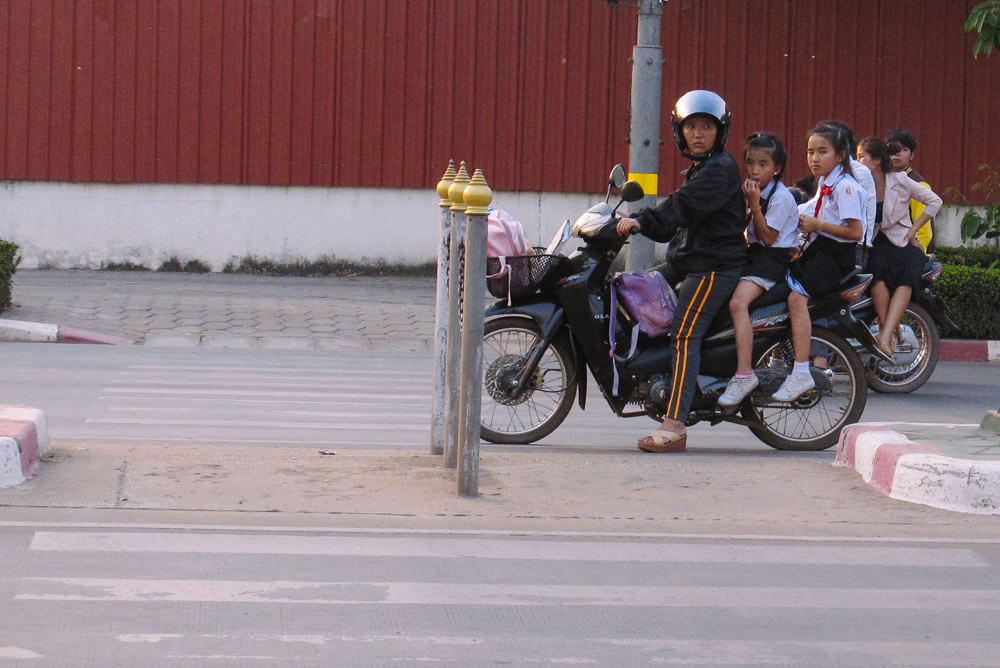 With those expectations set – we think we have a pretty solid case for why Vientiane rocks.

Laos’ capital is an attractive, languid city on the mighty Mekong River. There’s not a whole lot of activity going on on its expansive boulevards that host an array of stately colonial architecture draped in bougainvillea and glittering Wats with peaked roofs and dragon statues. But that’s sort of the pleasure of strolling through the city, no one is going to hustle you, and you will have plenty of room and time to set up the perfect angle for the photographs. 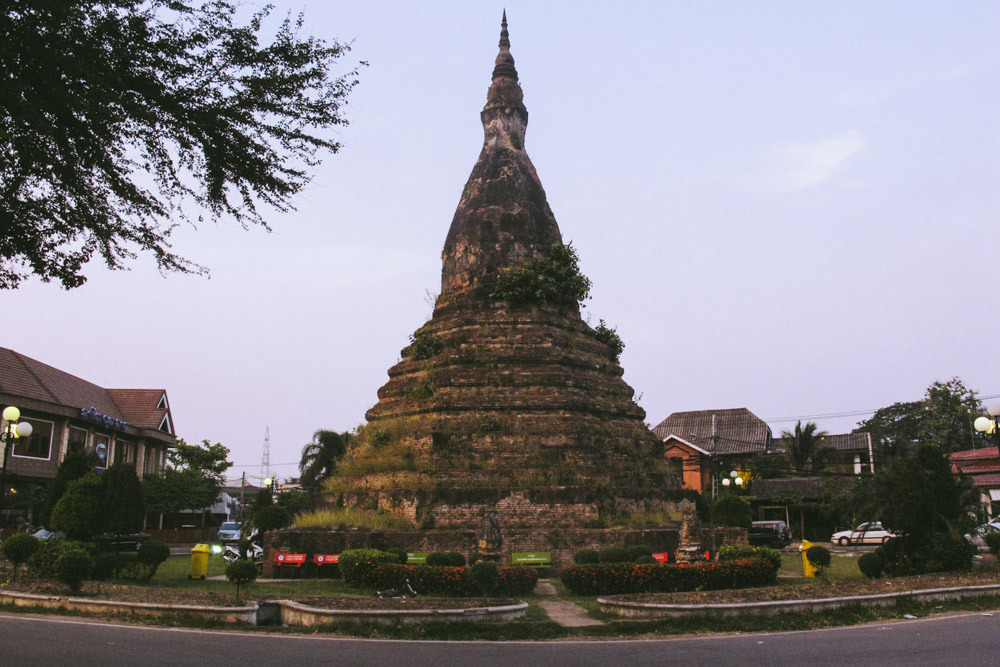 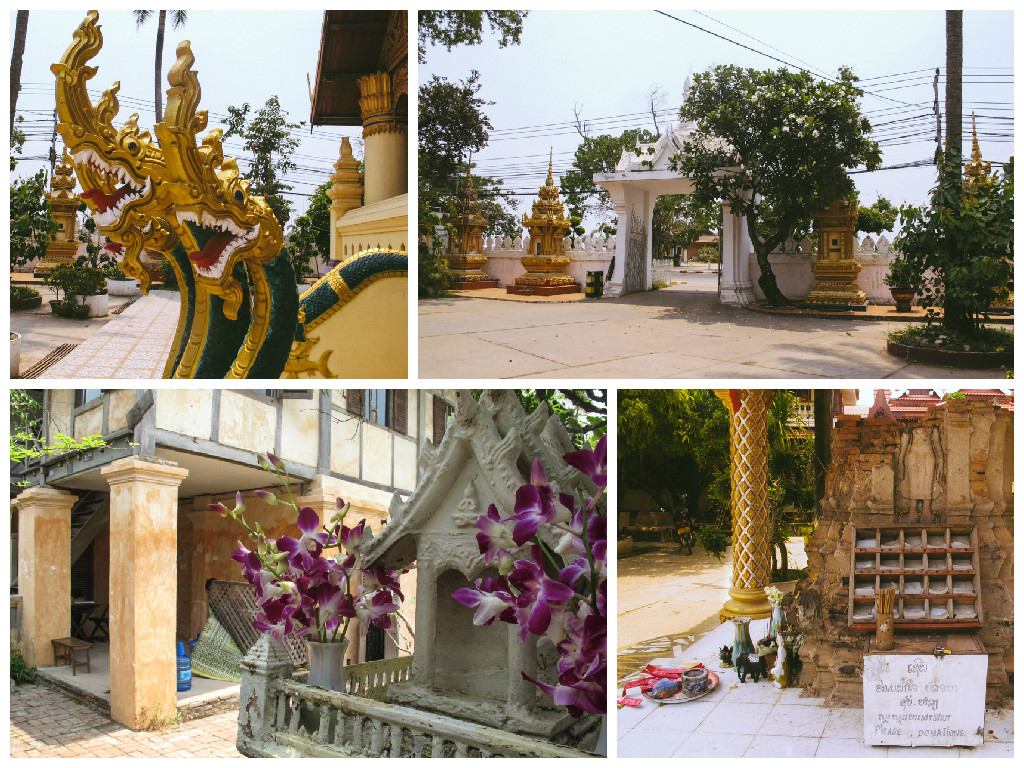 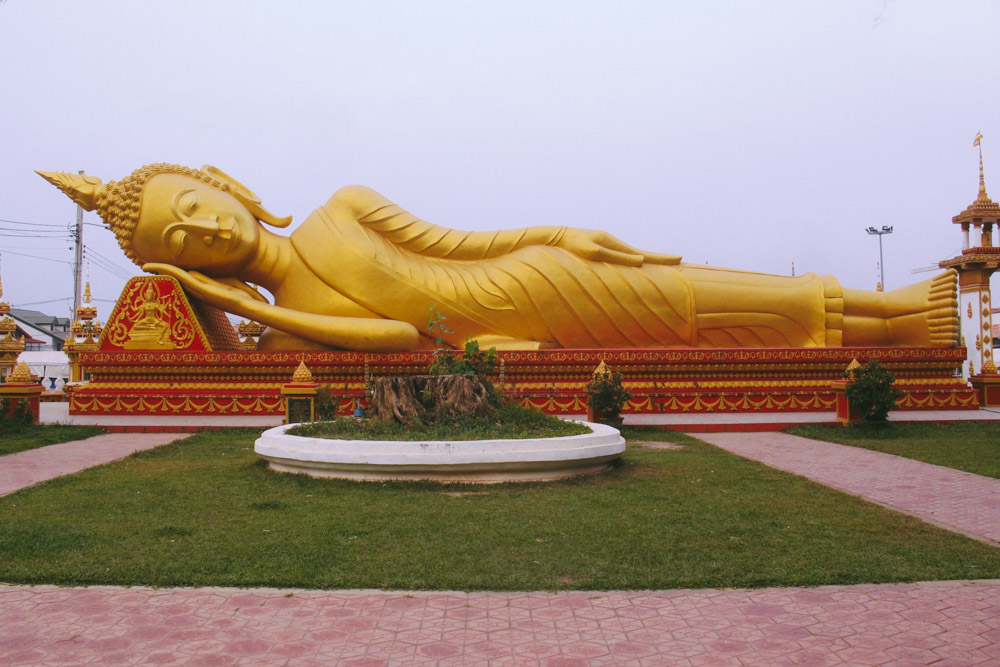 That Dam stuppa which lost its gold coat during the Siamese-Lao war of 1828, many Wats, and a Golden Reclining Buddha adjacent to Phat That Luang in Vientiane, Laos.

Most of the ‘action’ in Vientiane is concentrated along the riverfront walk – a daily gathering place in the early morning and evenings for the locals. This spot is great for people watching, soaking up Lao way of life, and filling up on delicious seafood. We particularly recommend Numfon restaurant, which serves delicious grilled fish and typical dishes like papaya salad in a very ambient setting. There is no address, but just keep strolling and checking menus, and eventually Numfon – with the name spelled in English on top of the menu – will come up! 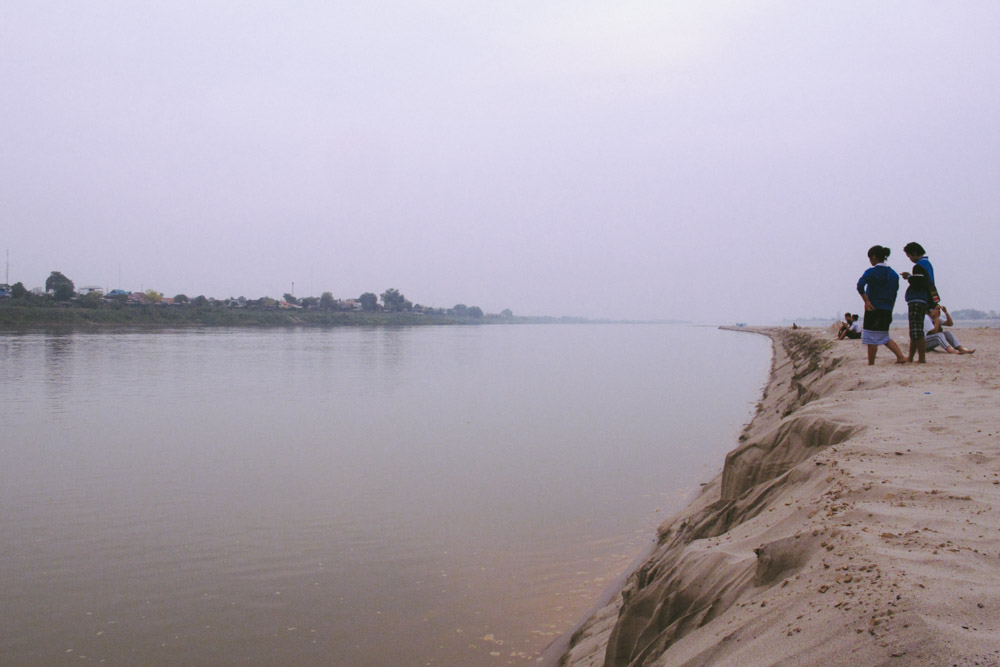 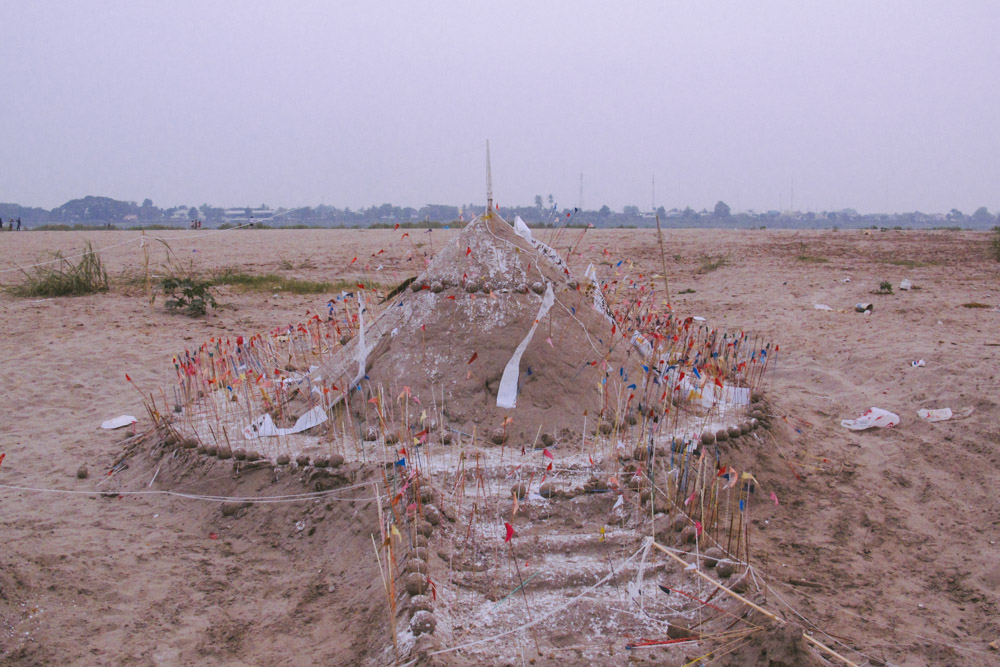 Mekong riverfront was scattered with remains of Songkran celebration – we think – when we visited. Vientiane, Laos.

In fact, the food is as delicious as we’ve had anywhere in Laos (no, we weren’t swayed by the overpriced croissants in Luang Prabang.) And there is even a Russian restaurant in Vientiane – double bonus points! For those interested it’s called MIG and we found it fairly authentic to taste, though they were missing sour cream at the time of our visit, which is kind of a no no for any Russian food restaurant. Nevertheless, if fancy strikes for non-Lao food, we do recommend MIG. 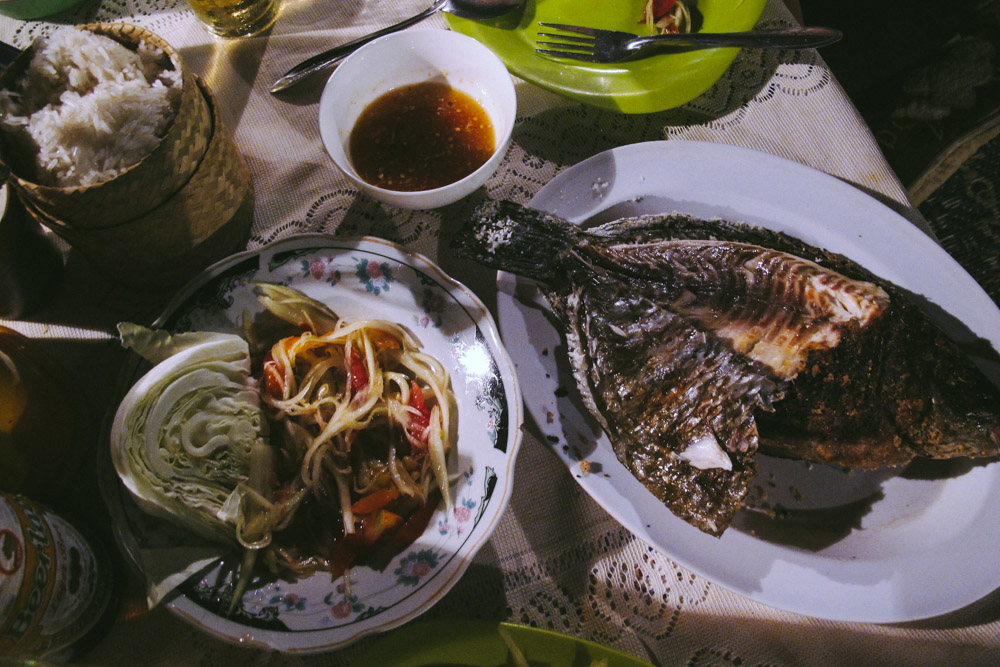 vientiane is full of ornate wats

There is a multitude of ornate Wats with free (!) admission in Vientiane. Seriously, if you are visiting both Luang Prabang and Vientiane, save your Wat sightseeing for the capital. Not only is there no admission charge, but also there are far fewer visitors. Extra bonus – we actually avoided temples in Luang Prabang because we felt pretty icky about how many visitors were sticking their cameras in monks faces (not that we do that, but we felt guilt by association). No hard feelings in Vientiane. 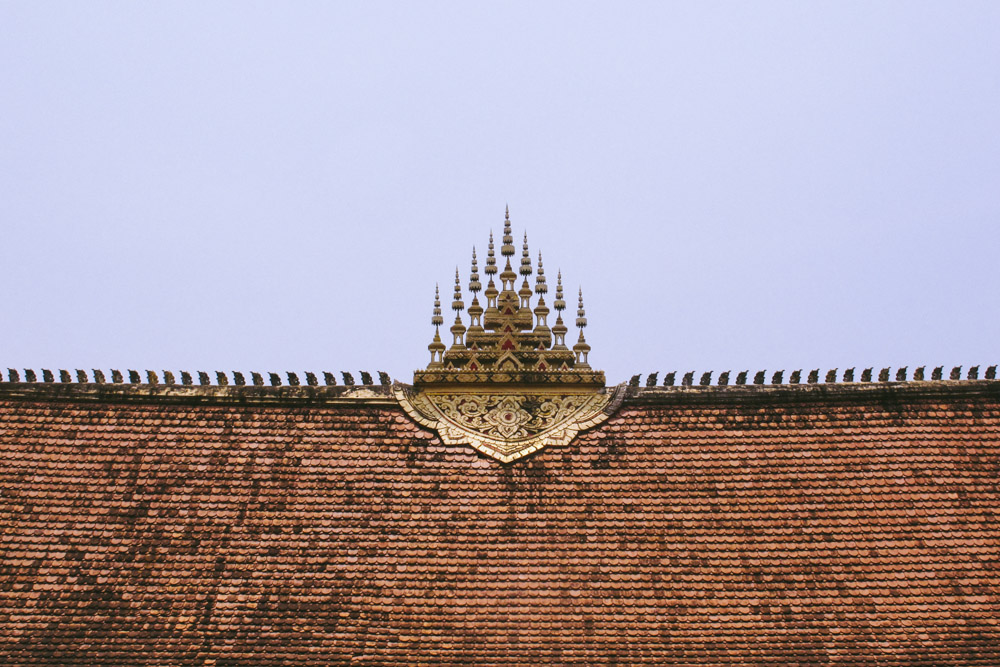 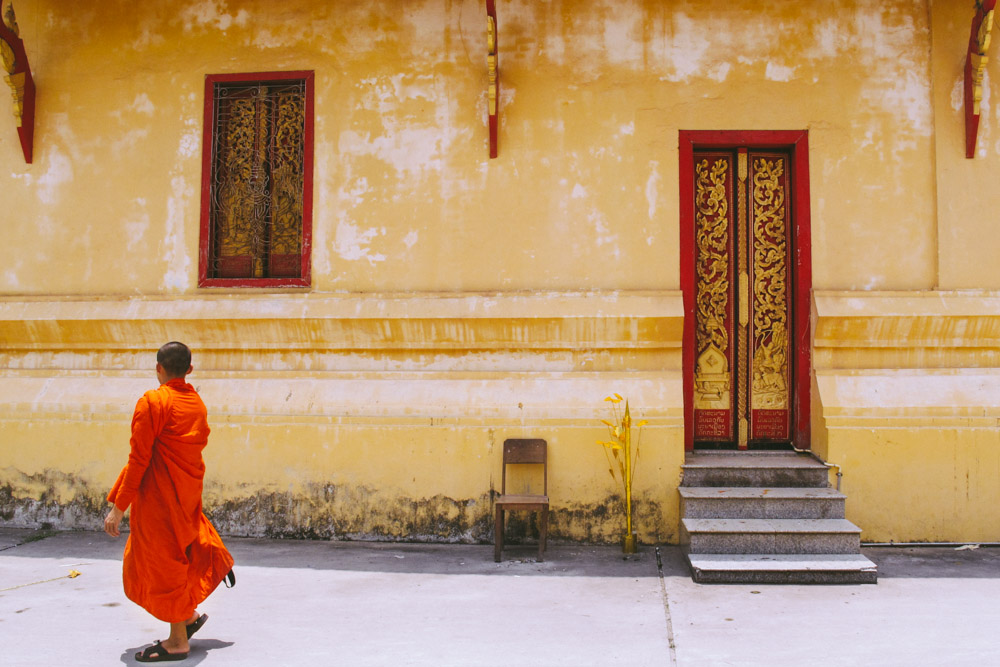 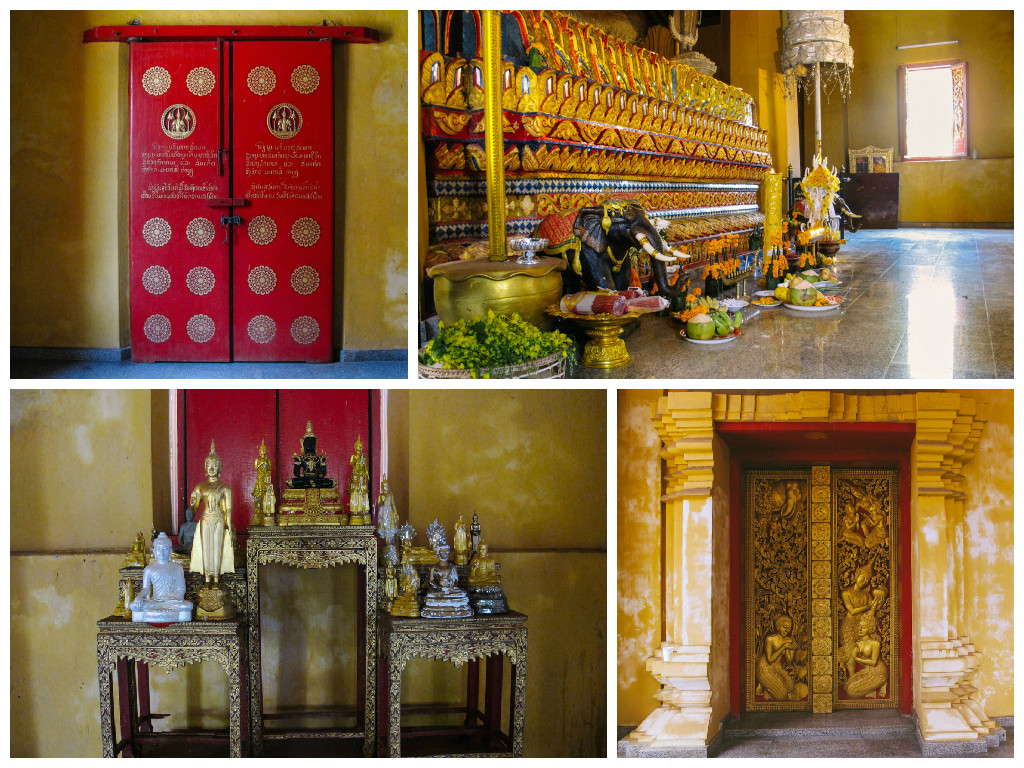 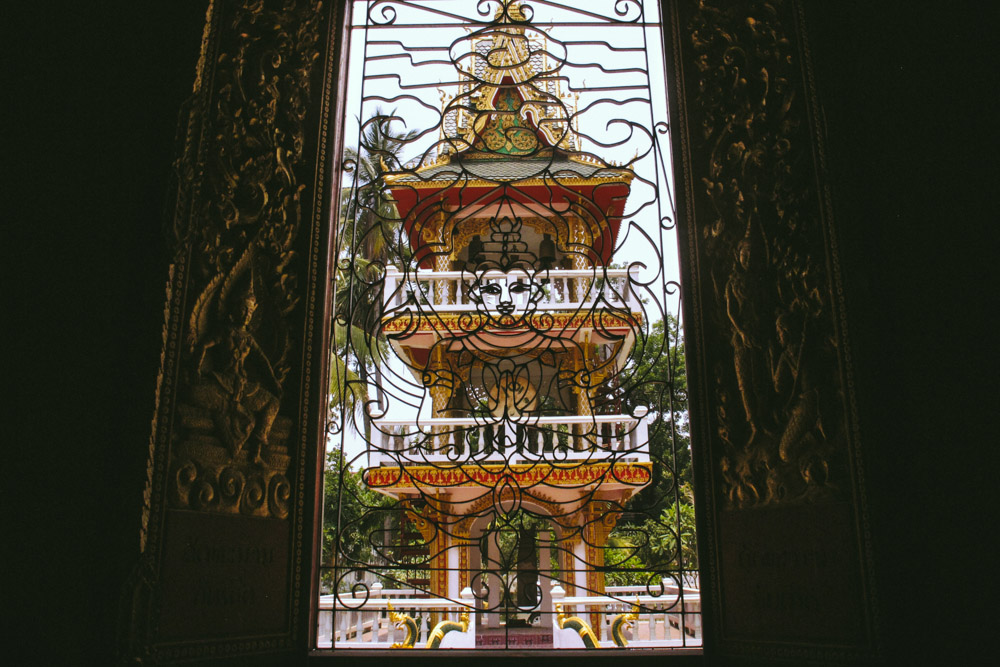 So many Wats, so little time. Vientiane, Laos.

there is a spirit city right outside vientiane

If you wish to take your spiritual sightseeing further there is a great big – if slightly bizarre – Buddha park, otherwise known as Xieng Khuan. Xieng Khuan actually translates as Spirit City, not Buddha Park, but no big deal – either way we got the point.  It’s about 25 kilometers outside the city, so you have to rent a bike / scooter or take a tuk tuk to get here, but it’s totally worth it. 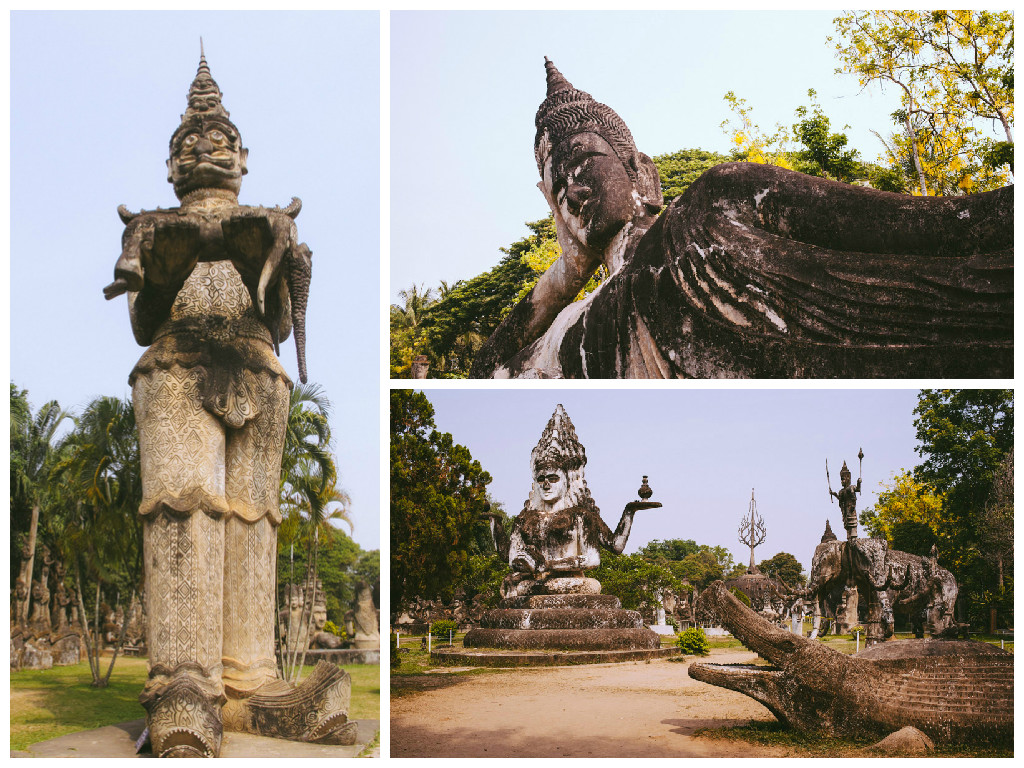 Shaman Luang Pu Bunleua Sulilat conceived and supervised the building of Xieng Khuan – designing over 200 Hindu and Buddhist concrete deities in the 1950s – as a testament to his faith. Though the artistry and materials of the Buddha Park sculptures are no match for the ancient masterpieces scattered across the region, the bizarre nature and climability / touchability of the park offsets what’s been lost in finer details and materials – in our opinion. 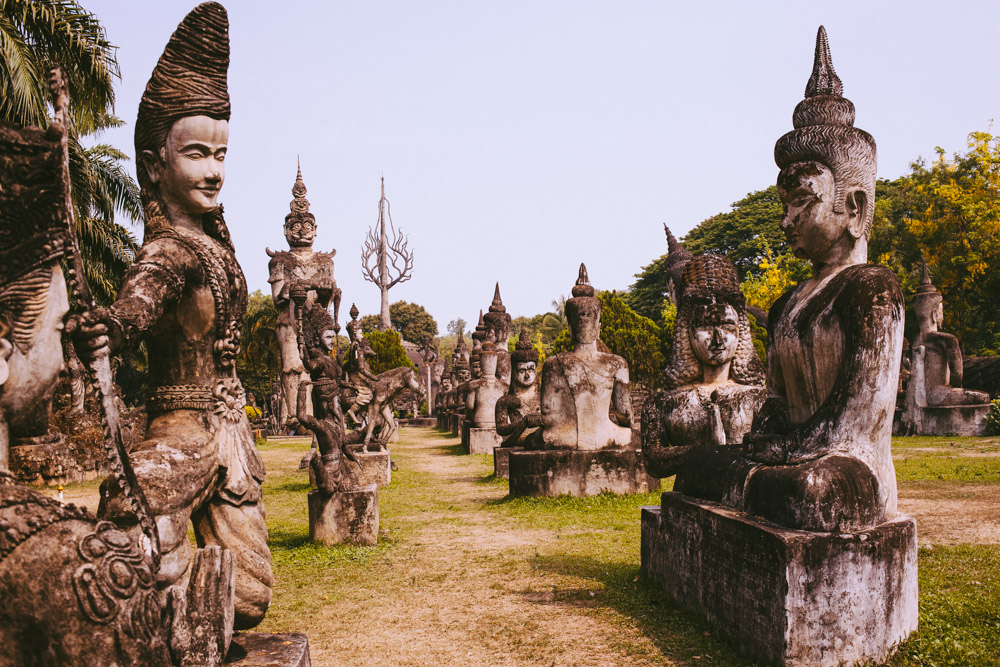 Concrete mythological ladies at the Buddha Park in Vientiane, Laos.

After the Pathet Lao revolution in 1975 Luang Pu Bunleua Sulilat skipped town – literary, he just went right across the river and built a replica Buddha park over in Nong Khai, Thailand. 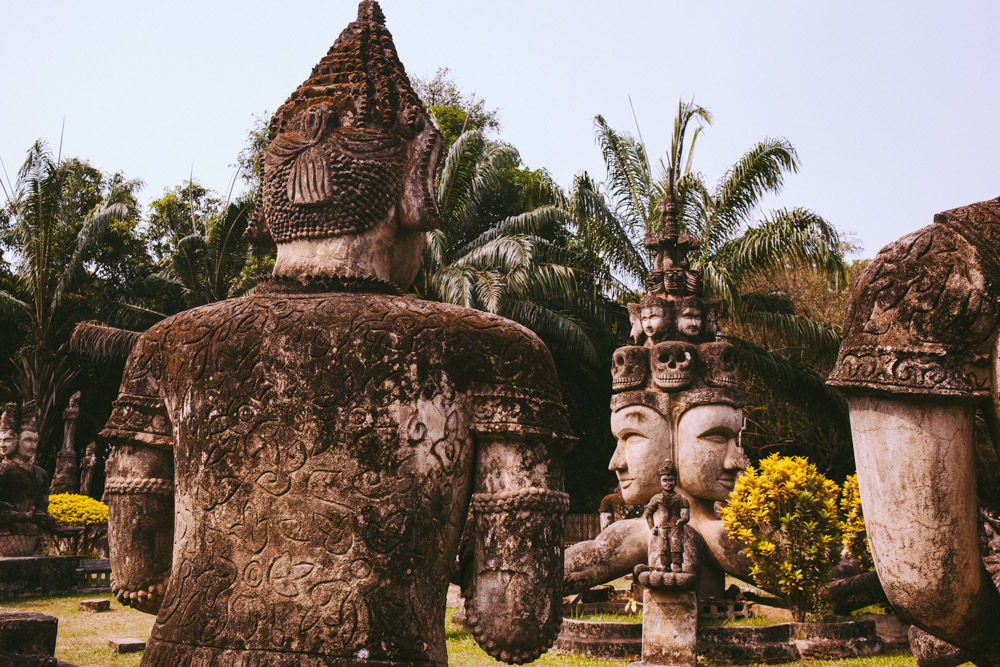 Oh, and on your way to or from the Buddha park, you must drop by a totally underrated Vientiane attraction: the Beer Lao – aka greatest Southeast Asian beer – Brewery and Headquarters. We were told something about how tours were canceled the day we went – we think they just didn’t feel like giving one at the moment. But it’s all good, no cameras are allowed in the facility, and if so, we can pretty much picture what the brewery looks like. And anyway, everyone knows that the best part of brewery tours is the tasting. Which we got to do plenty of. We got thoroughly acquainted with all five varieties of Beer Lao, including ‘farmer’ beer and ‘gold label’ beer. 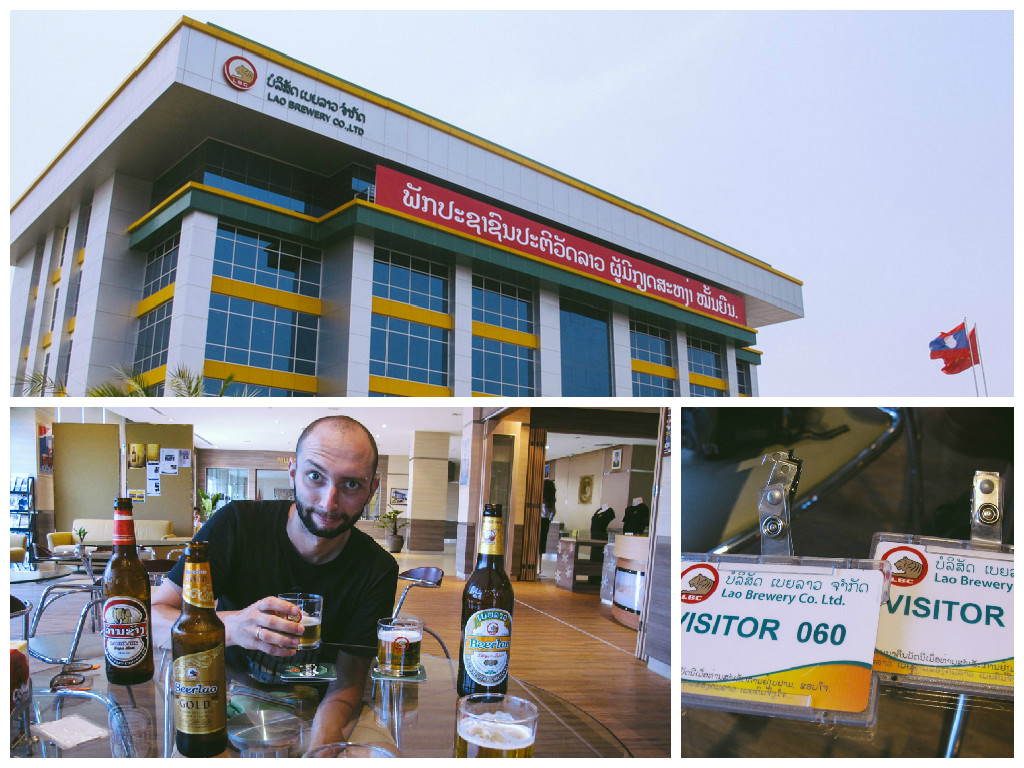 A visit to the Beer Lao headquarters complete with a tasting! Vientiane, Laos.

Finally, in our humble opinion, the biggest plus of Vientiane is that it offers plenty of amenities, but isn’t completely overrun by tourists like , er some other Laos destinations. There are plenty of cafes, bakeries, bars and restaurants. There’s pharmacies. Ok, maybe there are no malls or movies. BUT! The Laos capital is  conveniently located only 45 minutes by bus from Thailand. You can make a day trip out of it in either direction (and go visit the giant shopping malls or the Buddha Park in Nong Khai!) 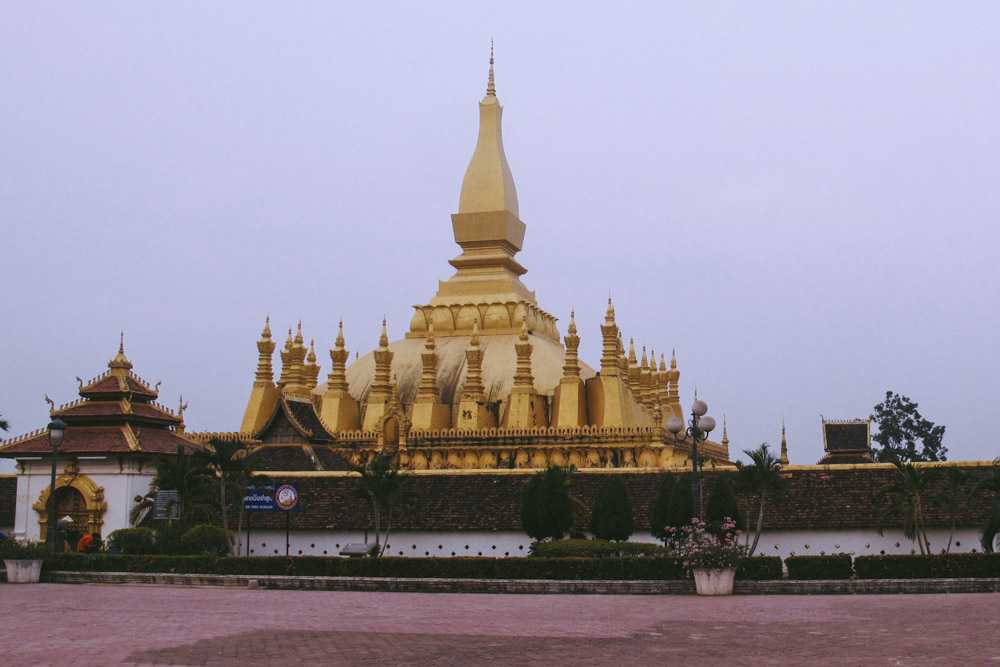 If after all these reasons Vientiane doesn’t count as a winner in your eyes – well then I guess, too bad? We enjoyed our three-day stay in the Laos capital, and believe it or not, we actually didn’t get to do / see everything I had bookmarked. There’s a certain pleasure in taking the Lao approach to life, if we didn’t get to it, well then, we didn’t get to it. Maybe next time. Maybe. 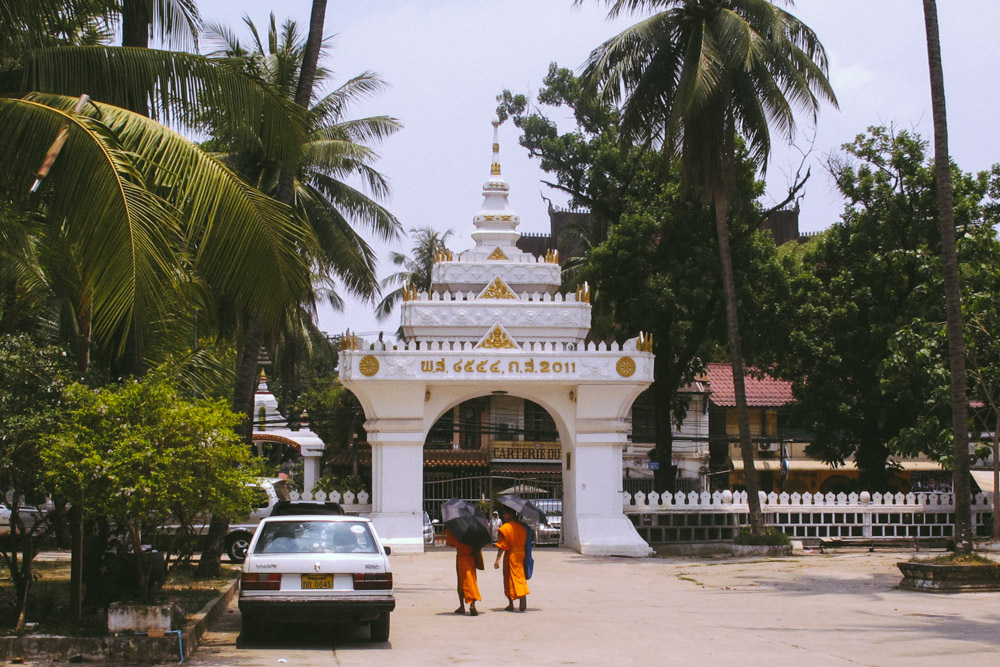 Hiding from the heat in Vientiane, Laos. 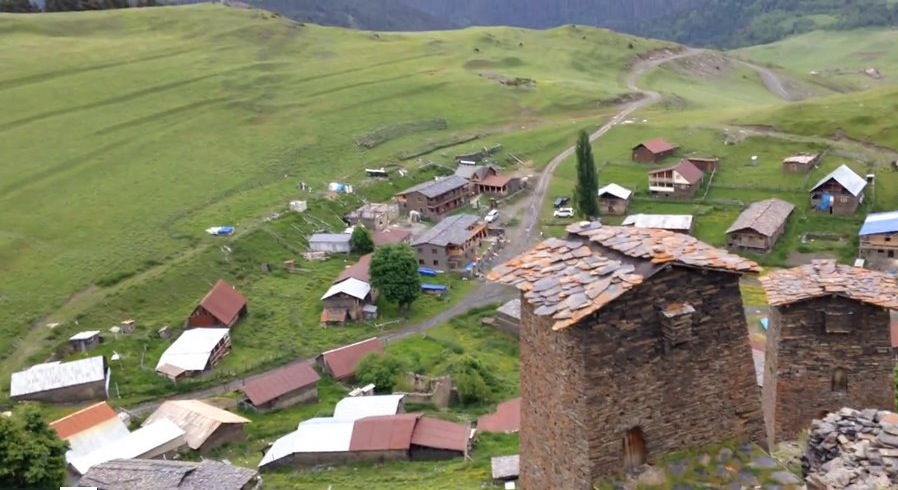 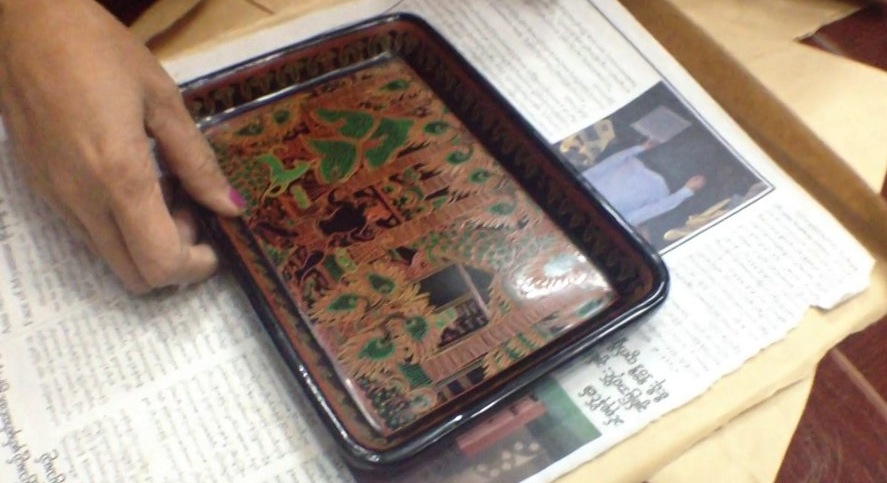 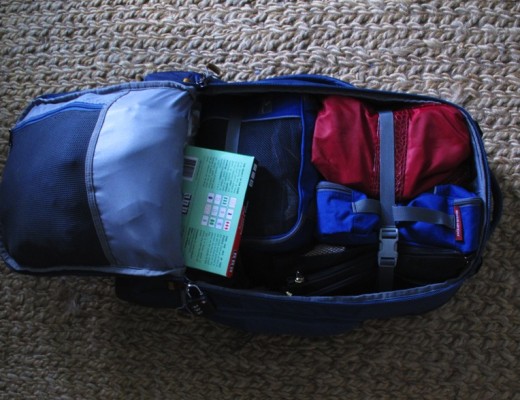