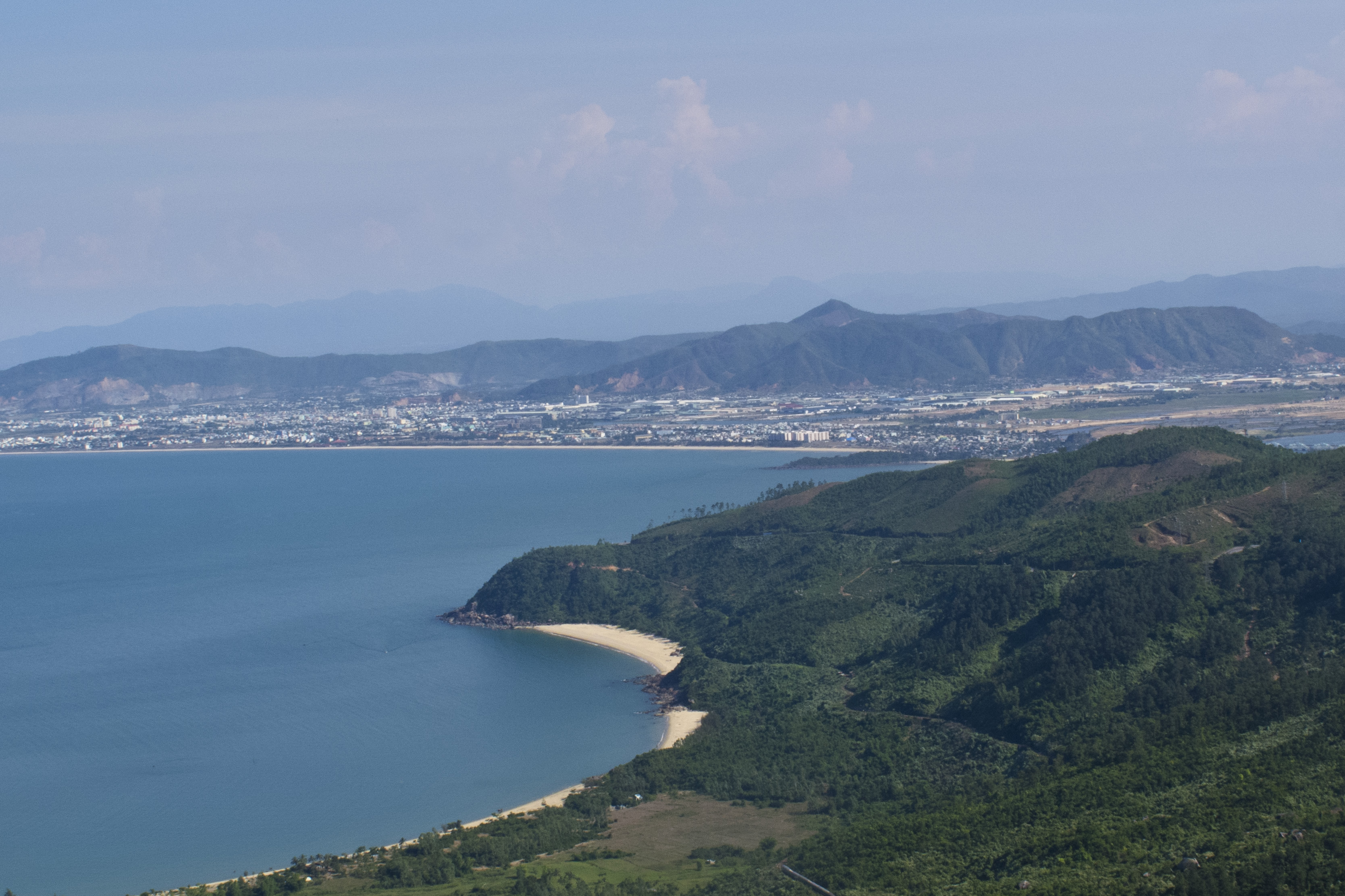 Remember how we did this epic 5-day motorbike tour with EasyRiders from Saigon to Nha Trang, Vietnam? It was a magical experience and we would highly recommend spending a few days on the bike to get a whole lot better feel for the country. Motorbikes = Vietnam, and Vietnam = motorbikes. 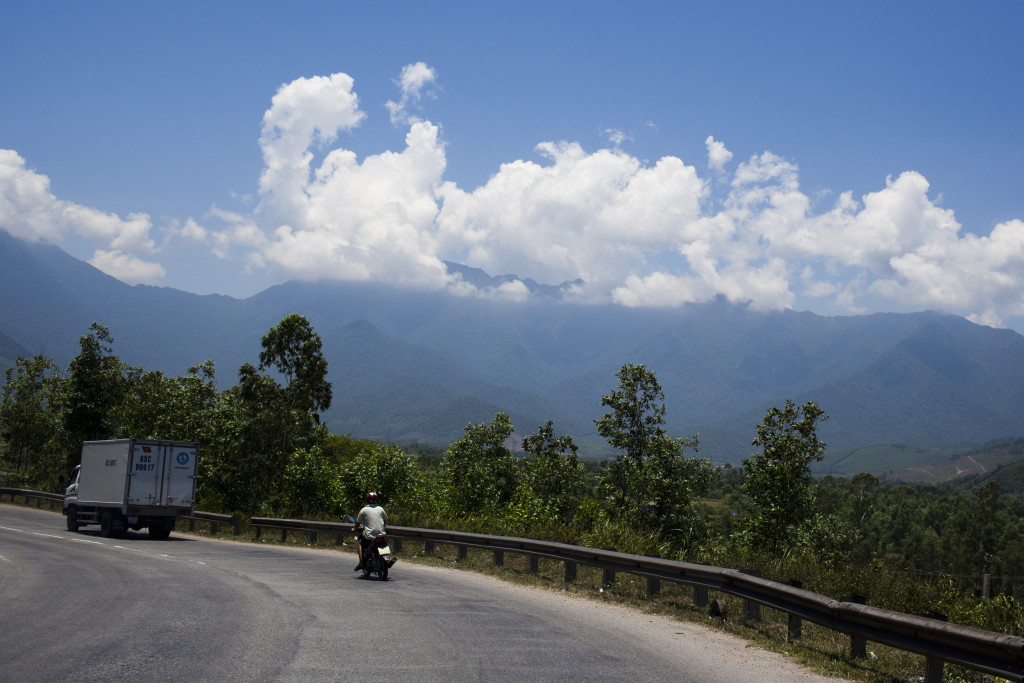 However, if you don’t have the time, money, or the inclination to jump on the bike for that long – here’s what you should do: Get yourself either to Hue or Hoi An, find a bike – either with or without a guide – and spend a leisurely half day traveling between the two cities via mountainous Highway 1, otherwise known as the Hai Van Pass. We had our own bike at this point, but I know that EasyRides, as well as many other outfits, do this tour. Trust me, it will be your best day in Vietnam. 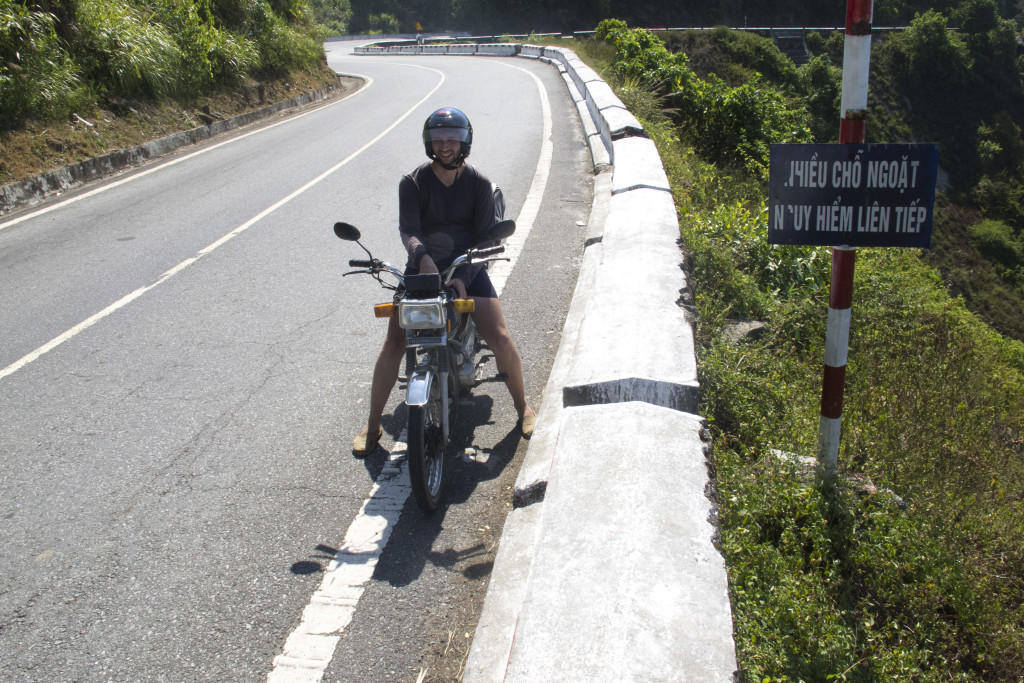 Before we get into our trip report, here’s something important to think about if you plan to drive yourself – there are plenty of points of interest and beaches to stop at along the way between Hoi An and Hue. You will not want to carry more than a light pack to these spots. Our hotel in Hue recommended that we send our bags on the bus for a small fee. Apparently this is a frequent practice by the Vietnamese. We went to the travel agency, dropped off our luggage, paid our marked-up fee, and were assured that our luggage would be dropped off at the agency’s office in Hoi An. THAT DIDN’T HAPPEN. When Sergey got to the agency’s office in Hoi An, they had no idea what he was talking about. They sent him to the bus station, from where the bus with our luggage was about to leave. He got to our bags just in time, by a lucky coincidence. So I don’t know what to recommend here. 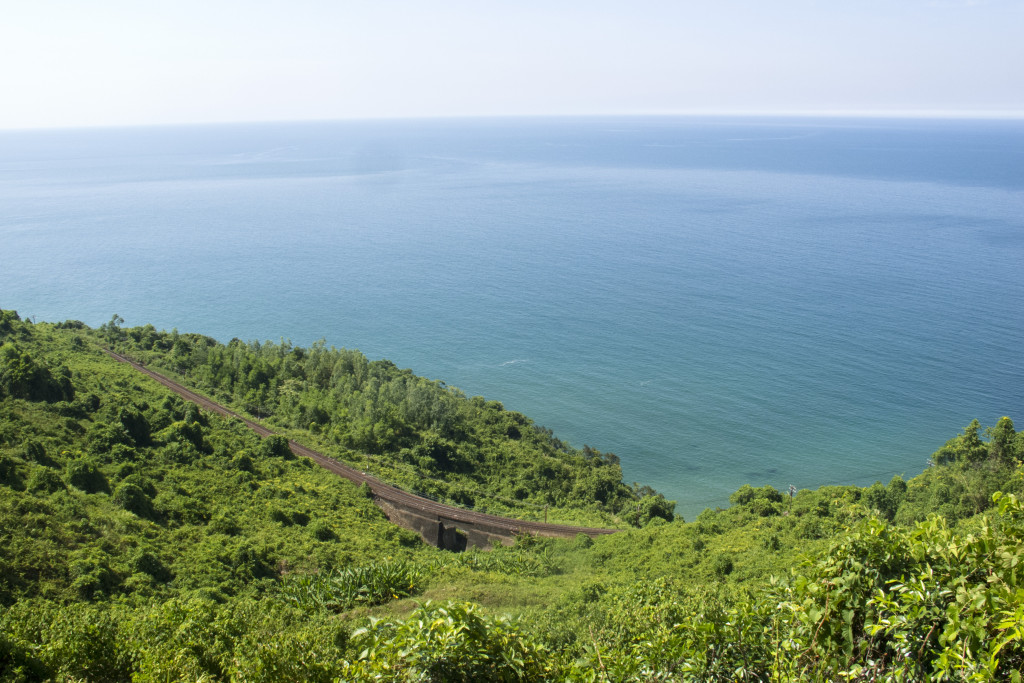 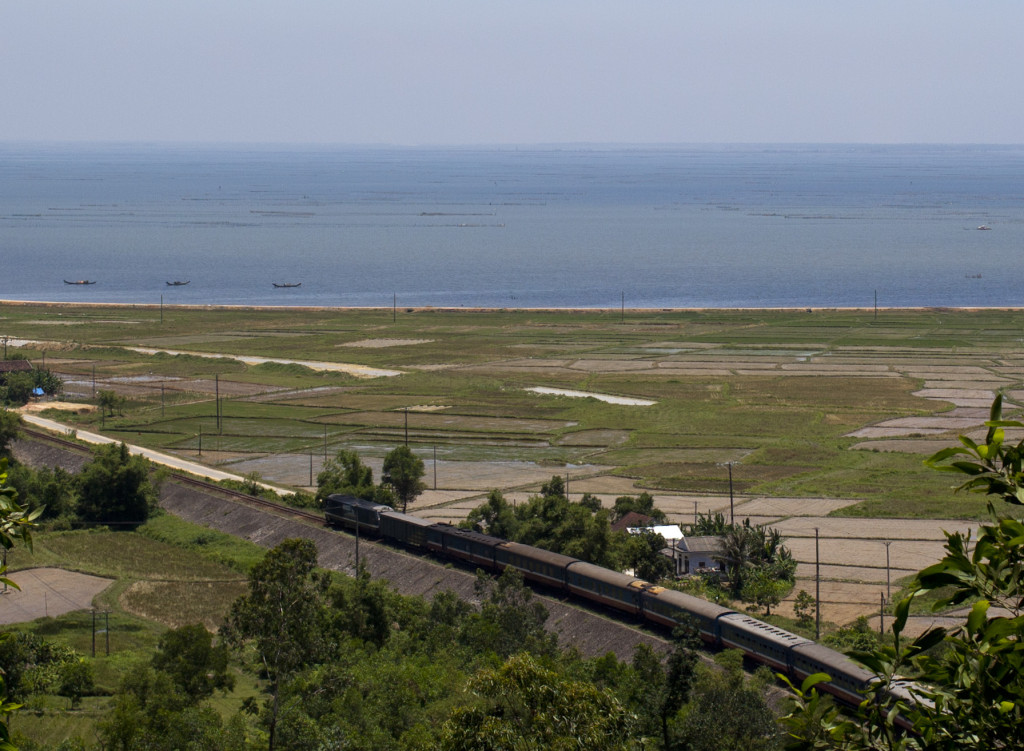 Train tracks mostly run inside the mountain, but occasionally passengers get a glimpse of the South China Sea. As seen from Highway 1, Hai Van Pass, Vietnam.

Moving on. We did our Hai Van Pass adventure from Hue to Hoi An. I don’t think there is really much advantage in doing it in one direction or the other – it’s great any which way you go. The views are spectacular and there is very little traffic thanks to a recently built highway tunnel, which borrows through the mountain and is a much quicker, but way less scenic, way to travel. As such, the Hai Van Pass is also probably one of the easiest, safest and the most rewarding motorbike trips that you can do in Vietnam. 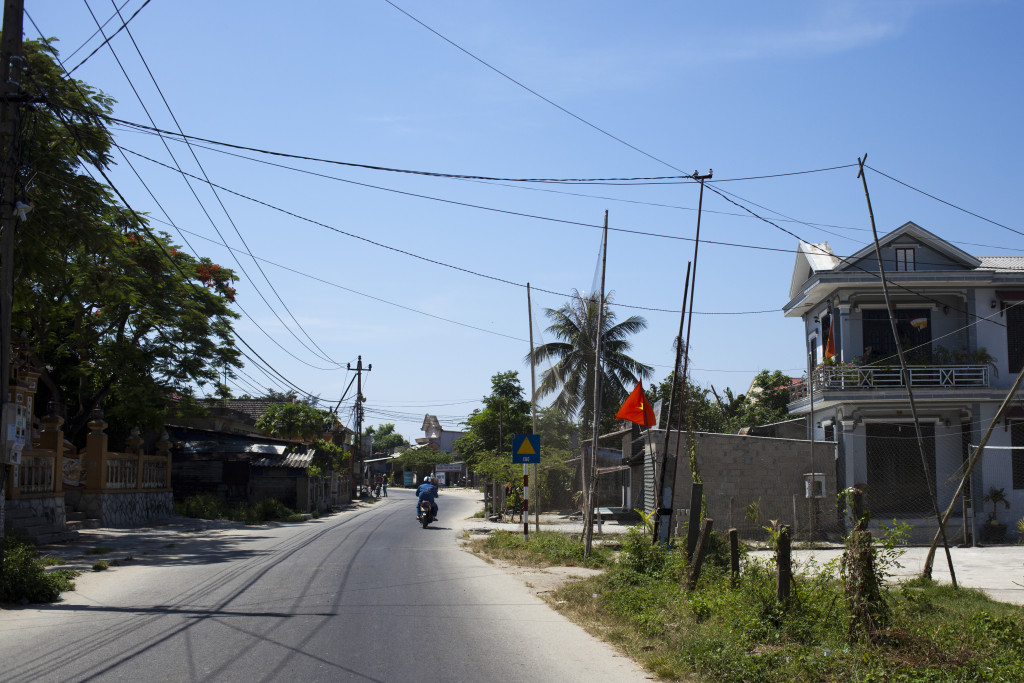 Leaving Hue around 10 am, we took small village roads weaving through massive cemeteries in the dunes. Fancy tombs are kind of a thing in Hue. The former imperial capital plays host to the imperial burial sites, which are more like palaces. The common man isn’t all about modesty around this part of Vietnam either, though. Both sides of the road were lined with ostentatious, massive monuments to the afterlife for miles. The whole site looked like a Gaudi-esque Cemetery Fantsyland. Apparently both Christians and Buddhists are in on this too, as we saw plenty of Jesus, Lady Buddahs and all sorts of other representations of both faiths. 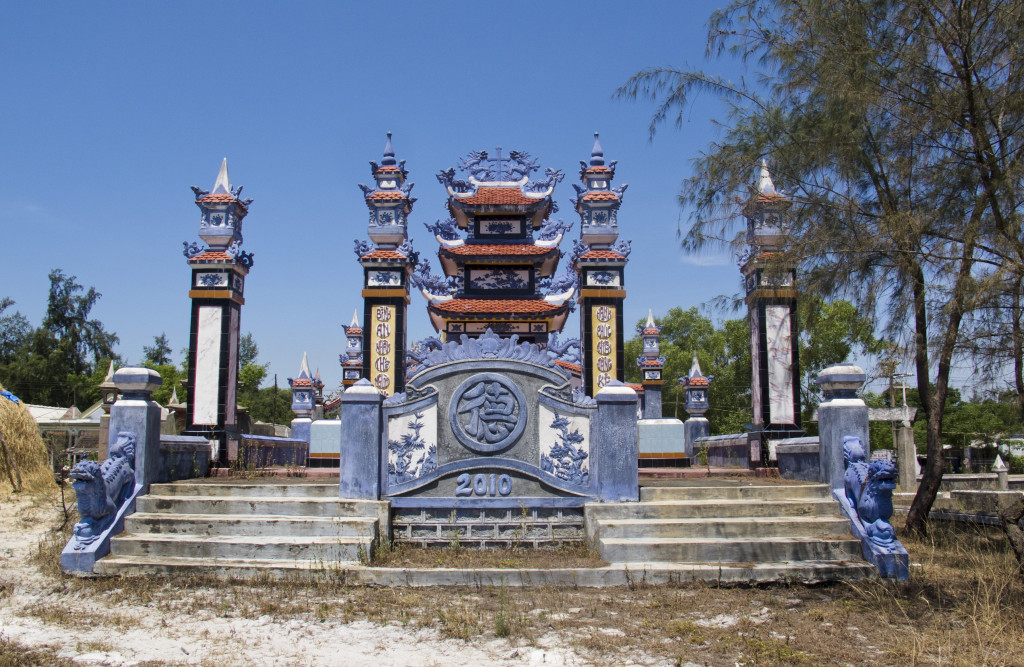 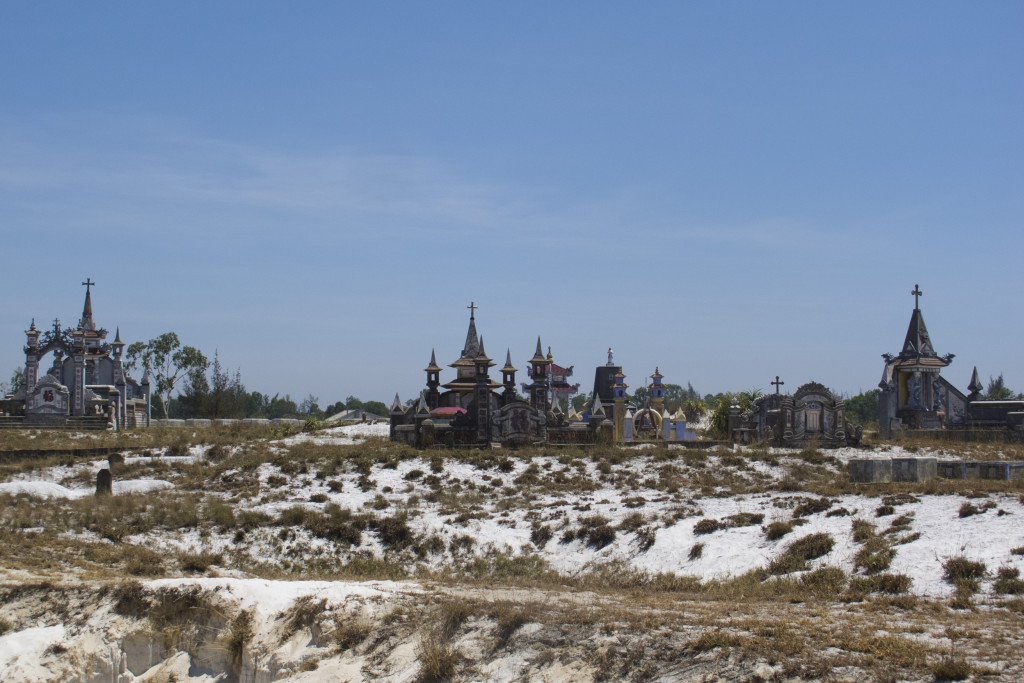 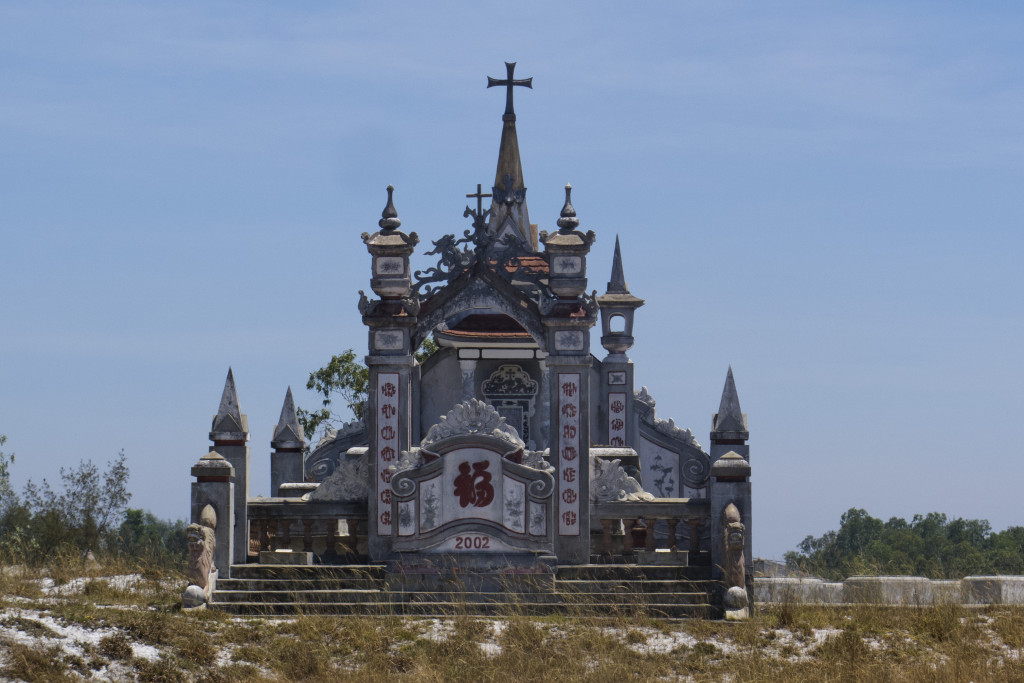 Our second stop was at the local beach, Thuan An Beach – which wasn’t much to look at, but it was nice to get off the bike and stretch for a bit. After that we followed the local road by the Sea to what the locals call Suoi Voi, or Elephant Spring. 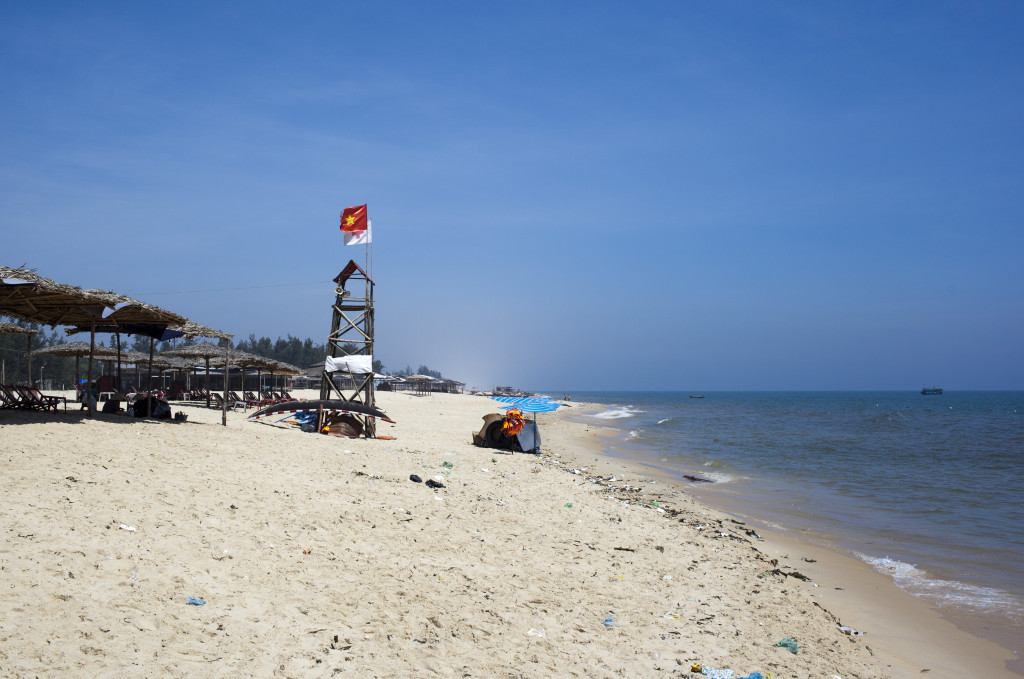 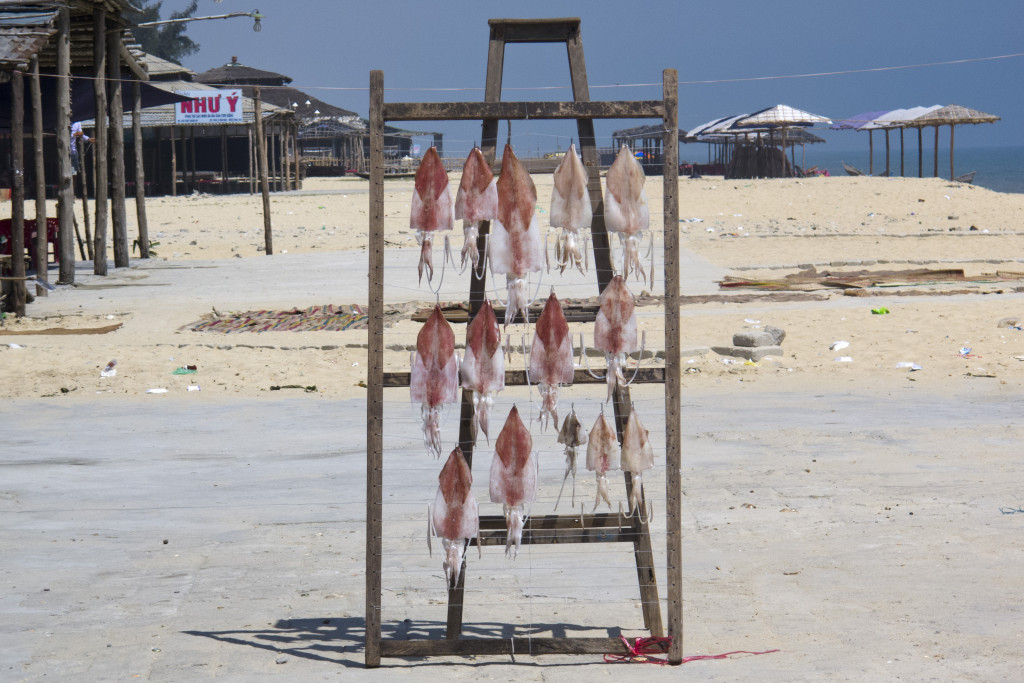 Since we were traveling on a weekday, we were expecting a nice quiet swim in what was described to us as a magical lagoon with cool water and great views. Instead we stumbled onto a very well attended celebration of some kind. End of the school year? Graduation? It was still refreshing to take a dip in the water, but Suoi Voi offered little in a way of relaxation. Note that there is a small fee for both entrance and parking, you can buy snacks and refreshments at the Springs. 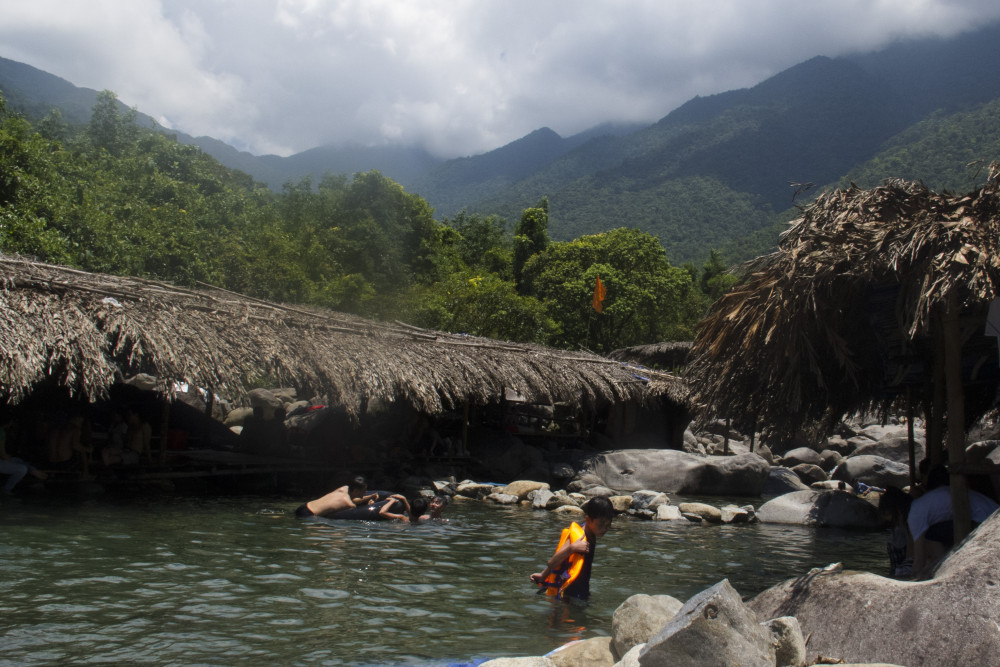 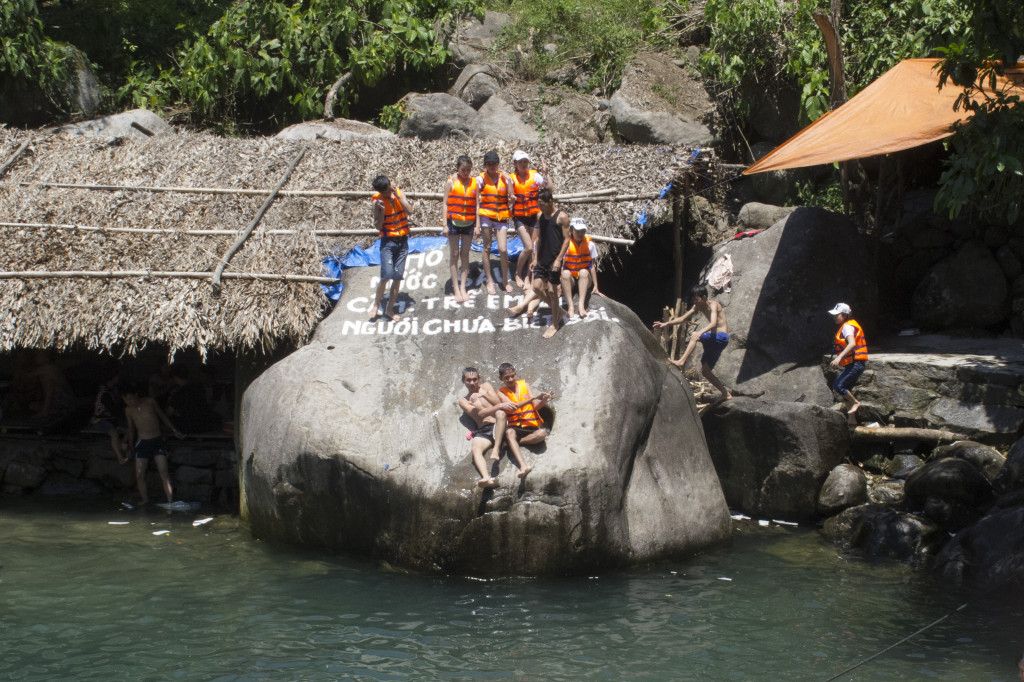 We jumped back on the bike and were off to Lang Co beach, our last stop before the Hai Van pass. There are a lot of resorts around there, but we found an entrance to the public beach, which was deserted, save for a few cafes. We declined to sample their menu, as prices were shockingly high. We did go for a delightful swim. Overall Lang Co was much cleaner than Thuan An. 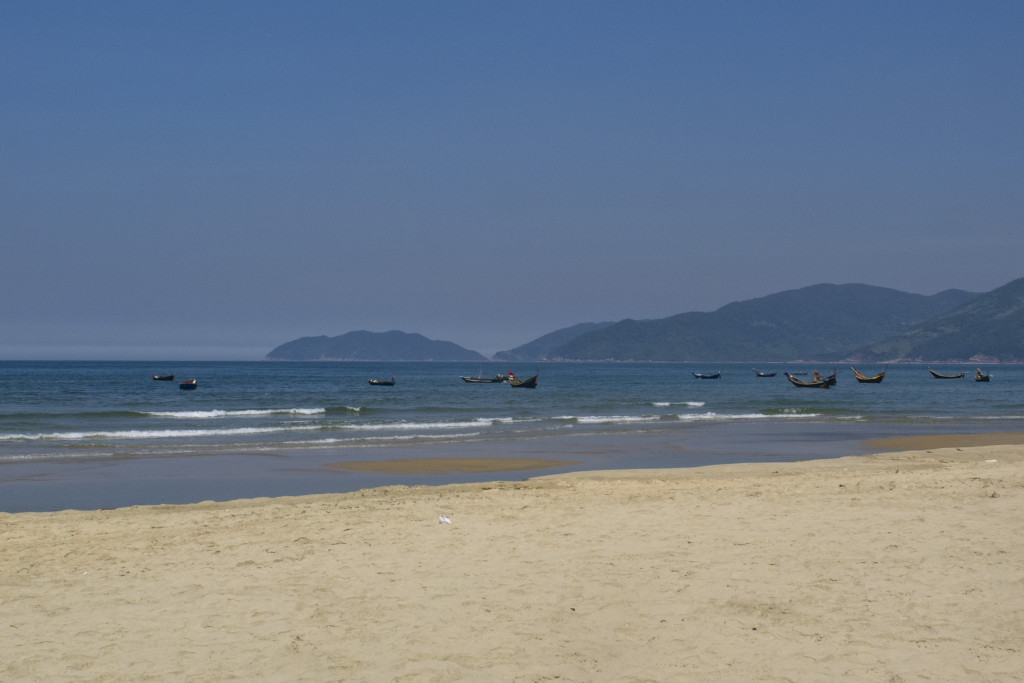 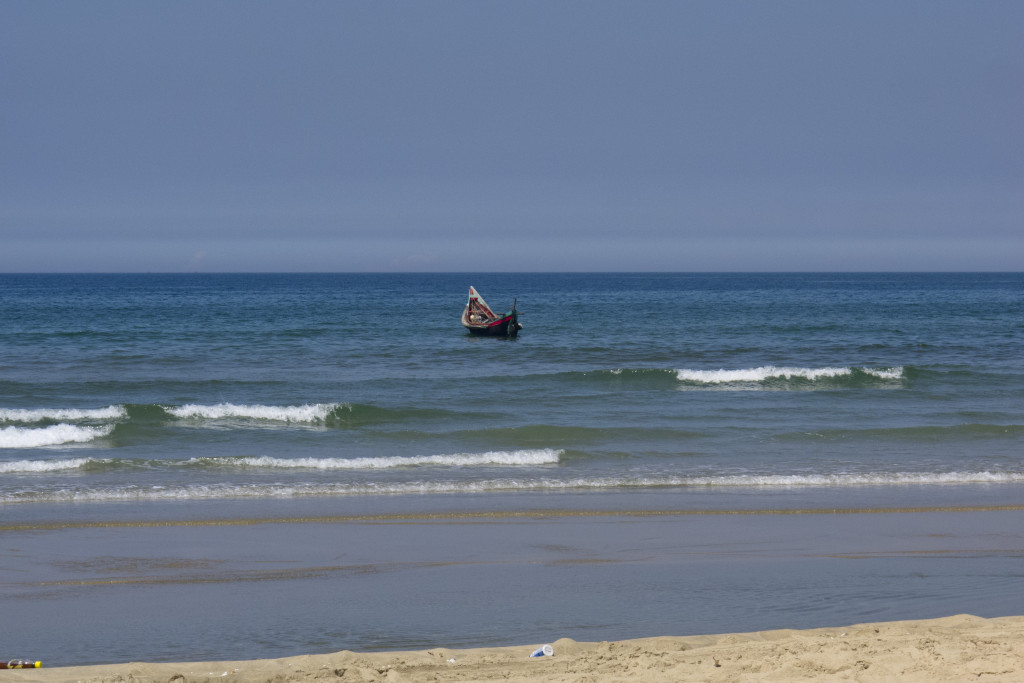 Refreshed we were off to take on the Hai Van Pass, which literary translates as the pass of the ocean mist The road climbing up to the top is gorgeous and worth it on its own of this trip. The views are spectacular. 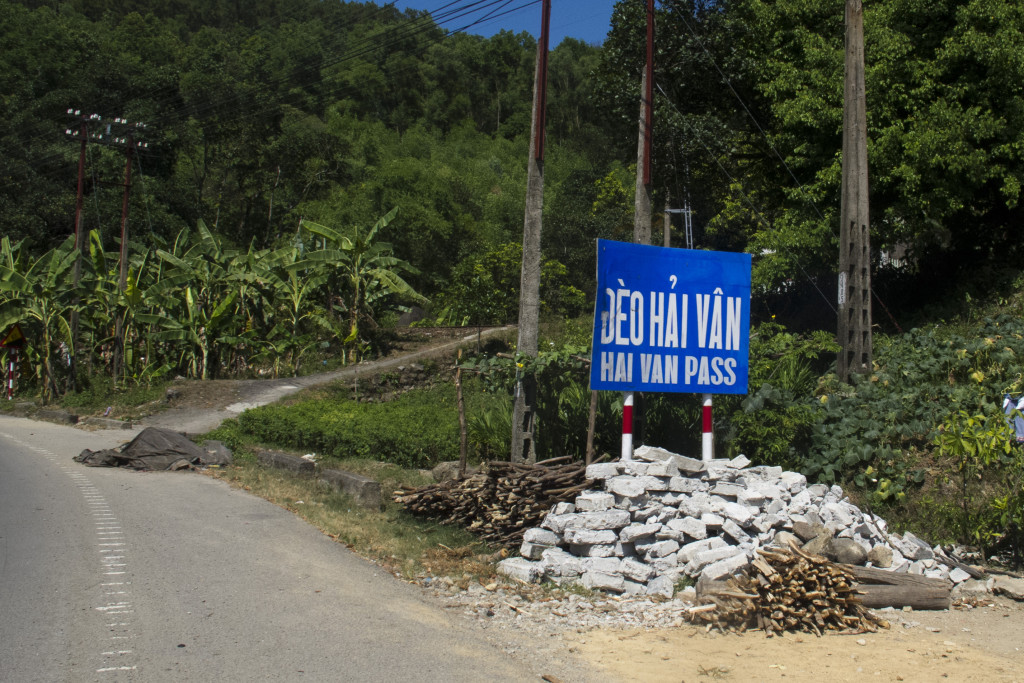 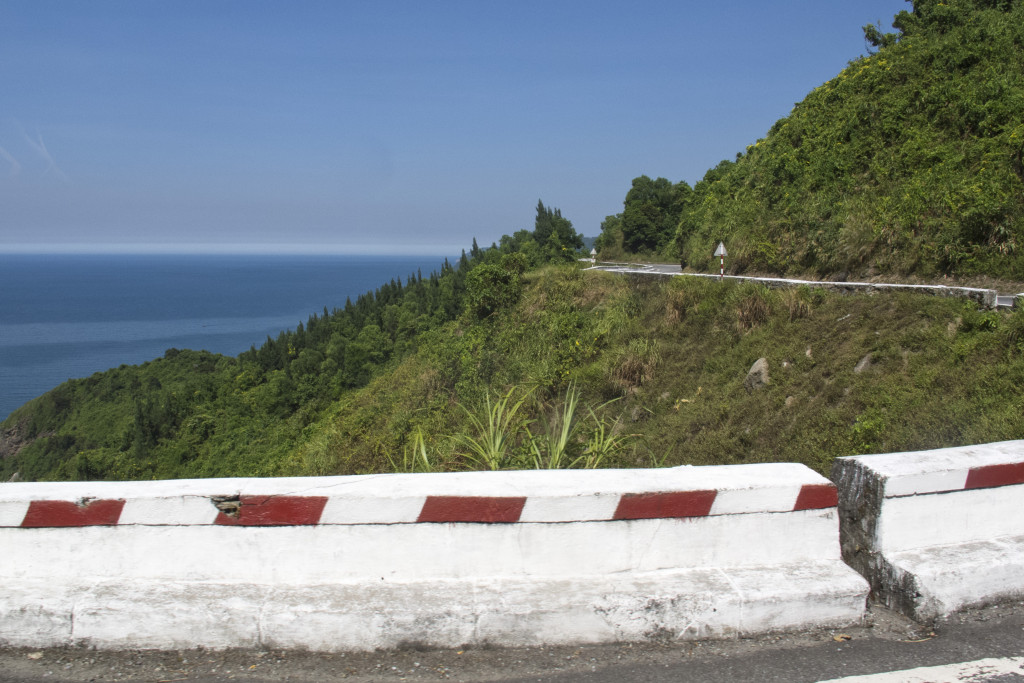 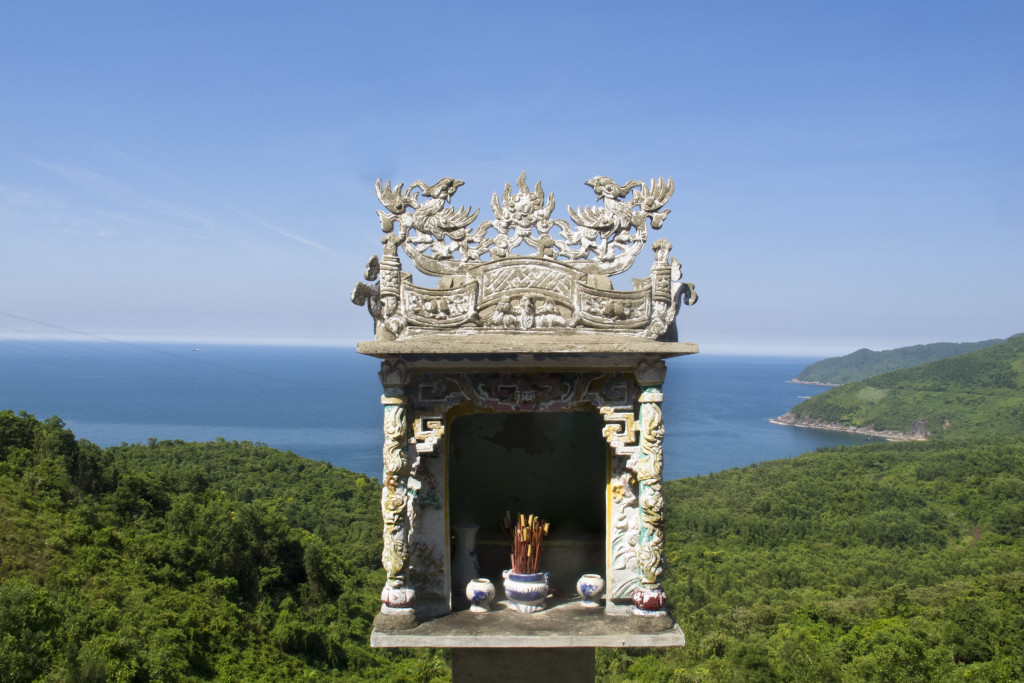 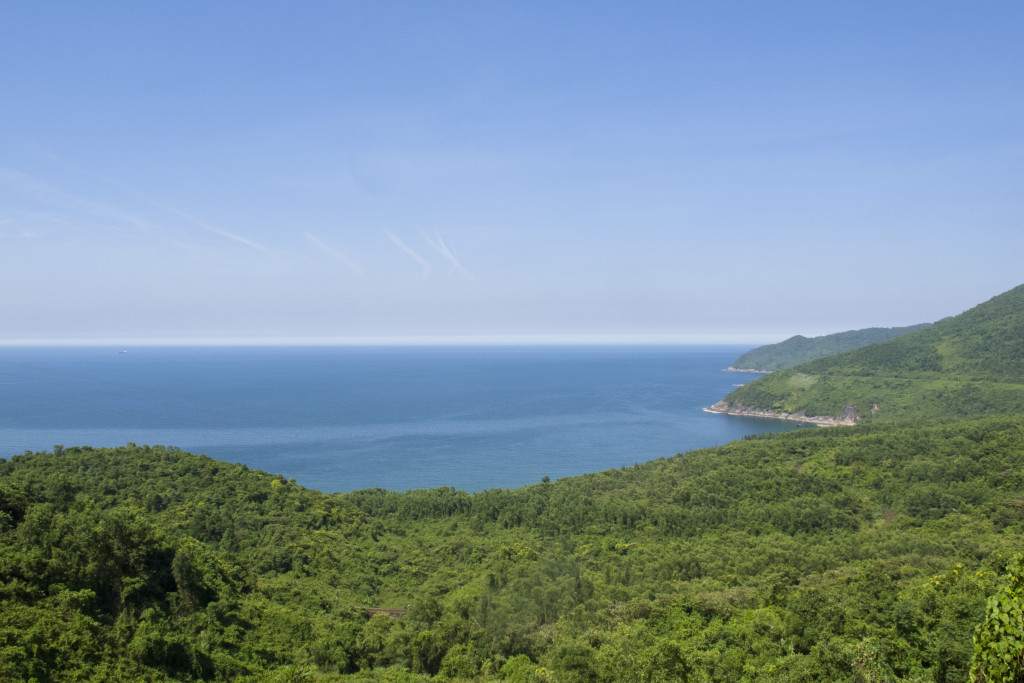 At the top of the pass there is a string of cafes and souvenir touts. There is also an abandon American base left over from the War, but it’s not much to look at. The top of the pass is a nice place for a rest – several cafes offer good views. Coming from the north / Hue side of Highway 1, we stopped at the last coffee shop before the descent begins.  The place offered great view of Danang, and only slightly overpriced coffee. 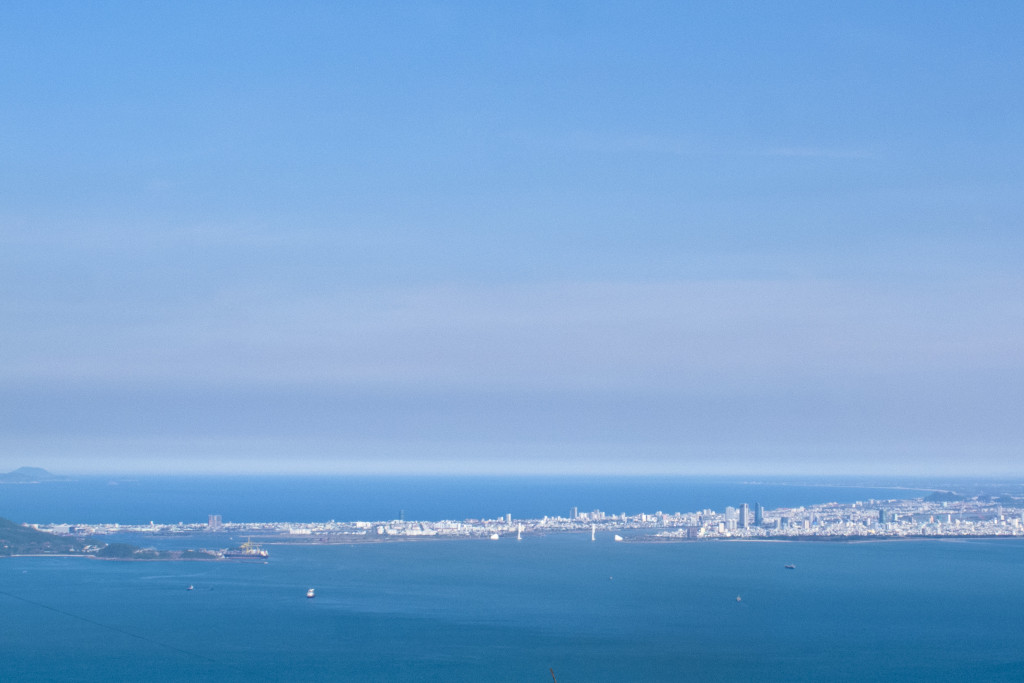 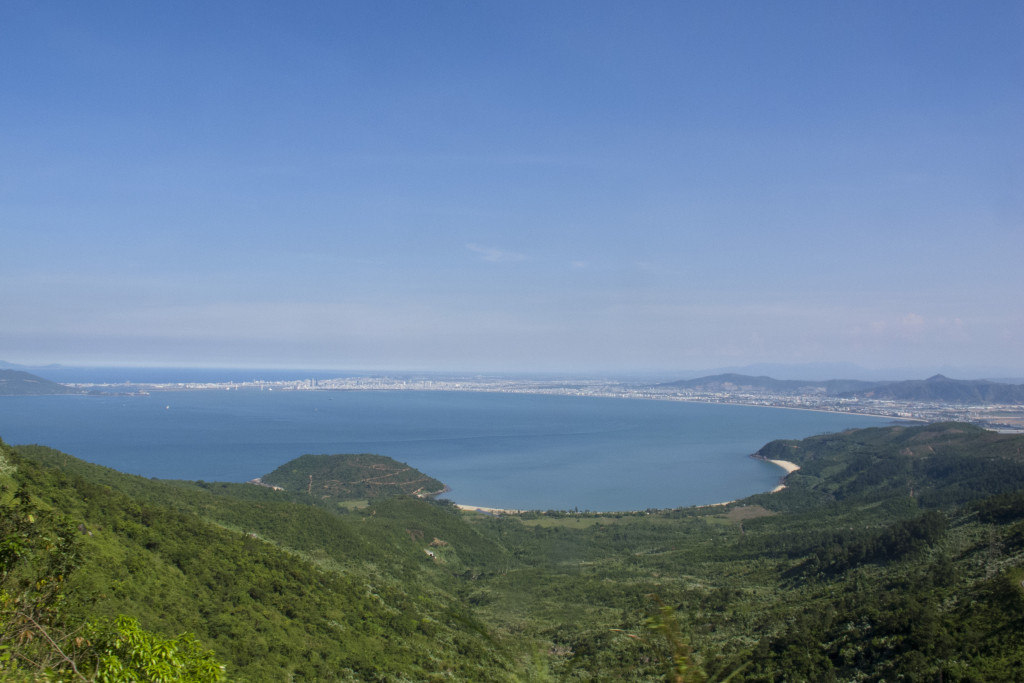 View of Danang from the top of Hai Van Pass, Vietnam.

From there it was a breezy descent, we drove through Danang on the Ocean road, and attempted to find a public entrance to the infamous China beach. However, all we saw was private entrances to the construction sites of luxury resorts. 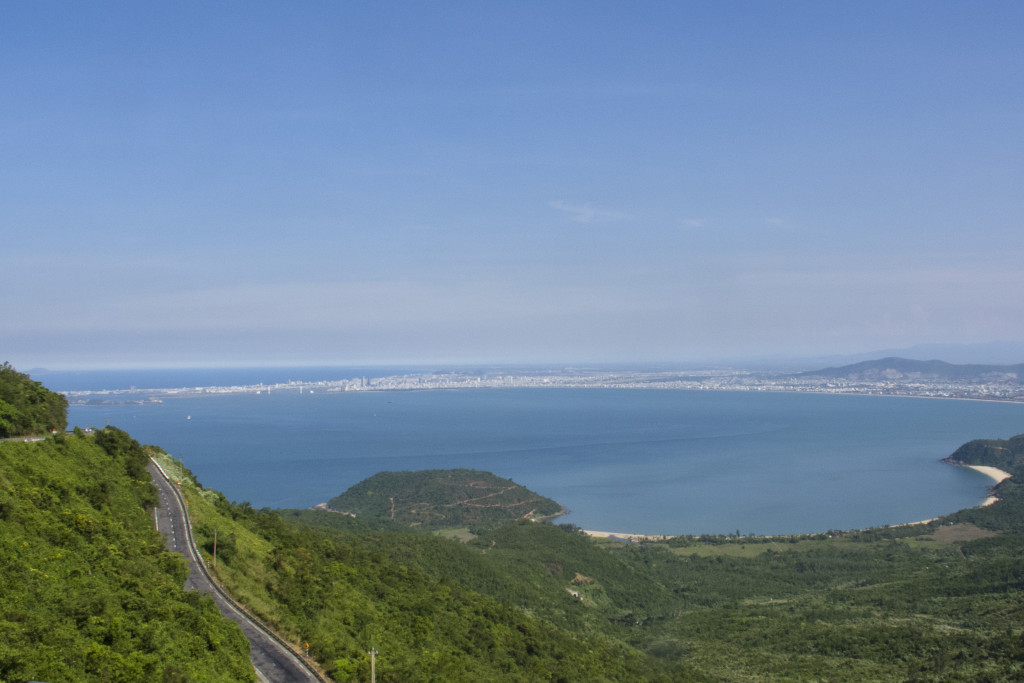 We did find that once we entered Danang proper there was a long stretch of public beach, which we made a final quick stop. We were impressed by how close the beach is to the city – just a hop and a skip from towering apartment buildings. It’s not my ideal for a total blissed out vacation, but if you are living there – a quick swim in the morning and after work? That sounds pretty awesome to me. 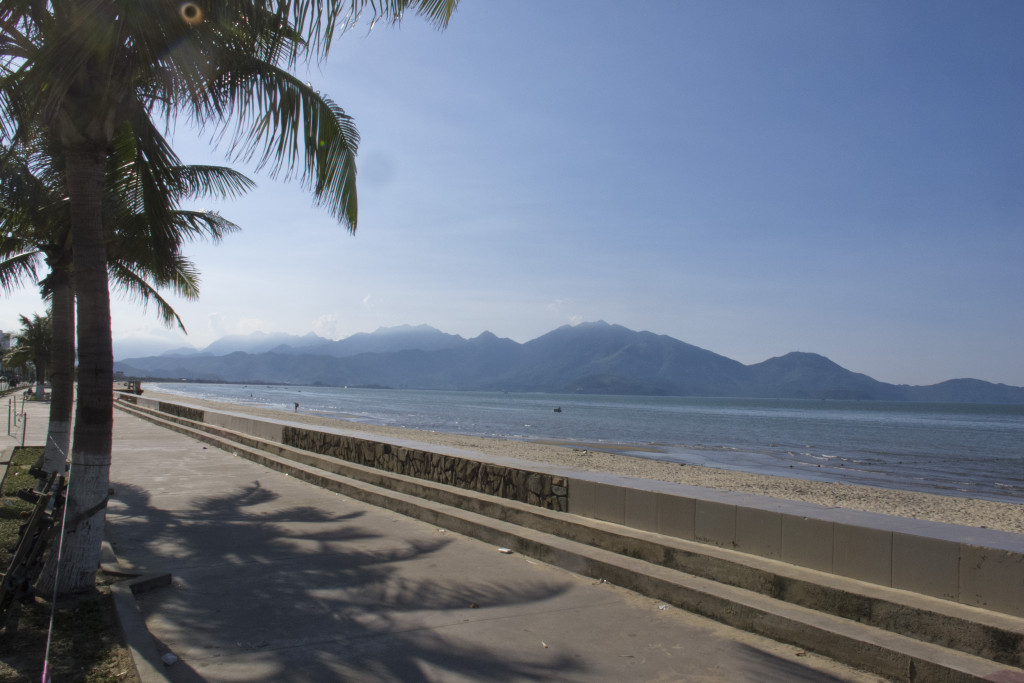 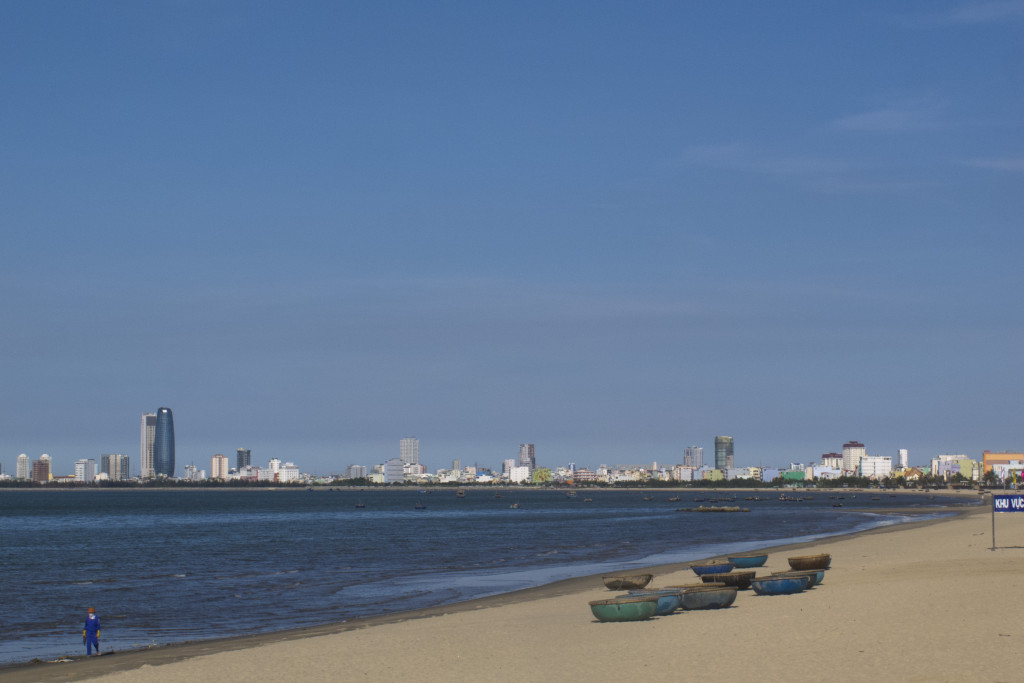 We also contemplated of stopping by Marble Mountain, but nixed the idea in favor of showers and relaxation. So there you have it – an awesome half day on motorbike in Vietnam, full of excellent views and good swimming. 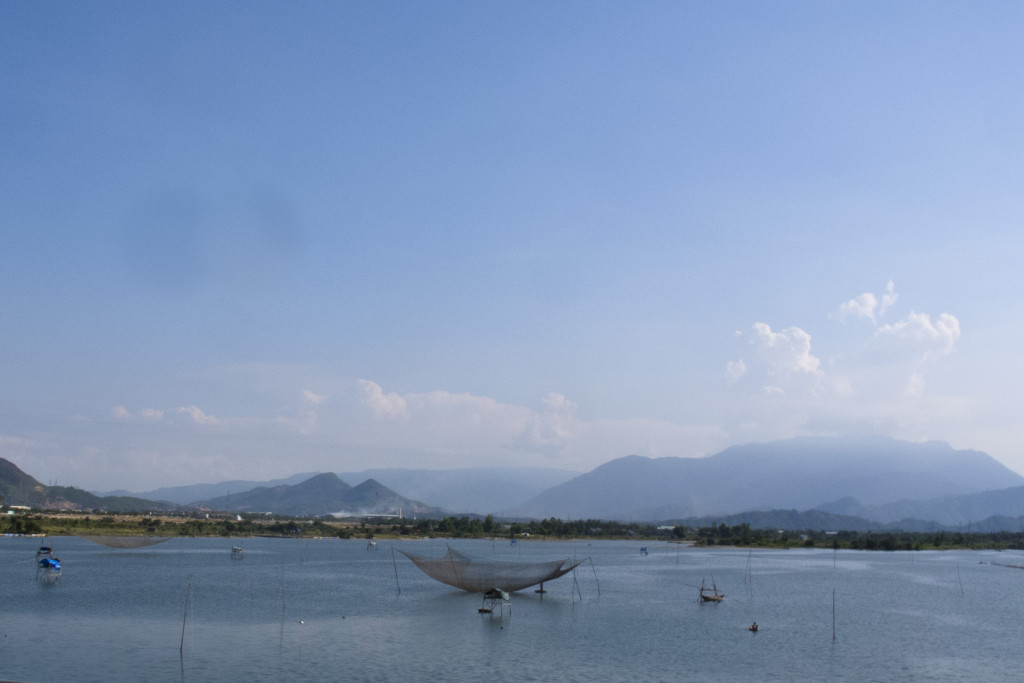 We must give huge thanks to Vietnam Coracle blog, which provides excellent and detailed guide with maps and directions for the Hai Van Pass trip. 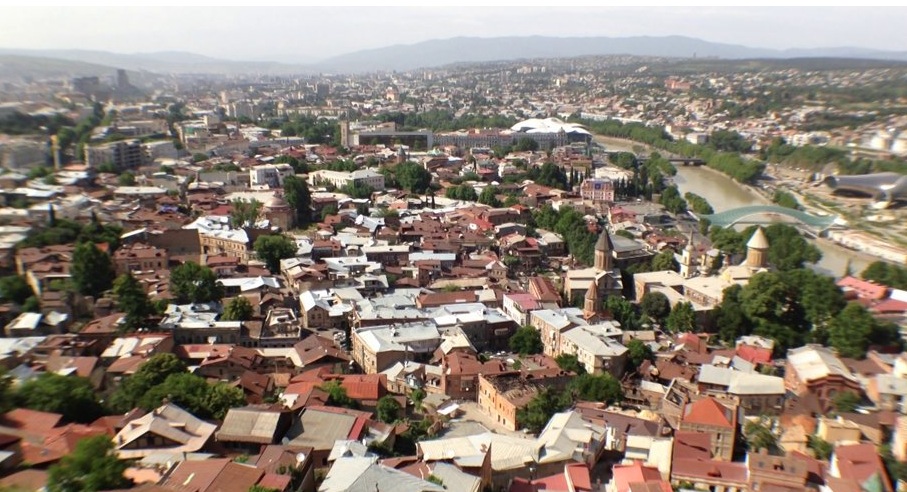 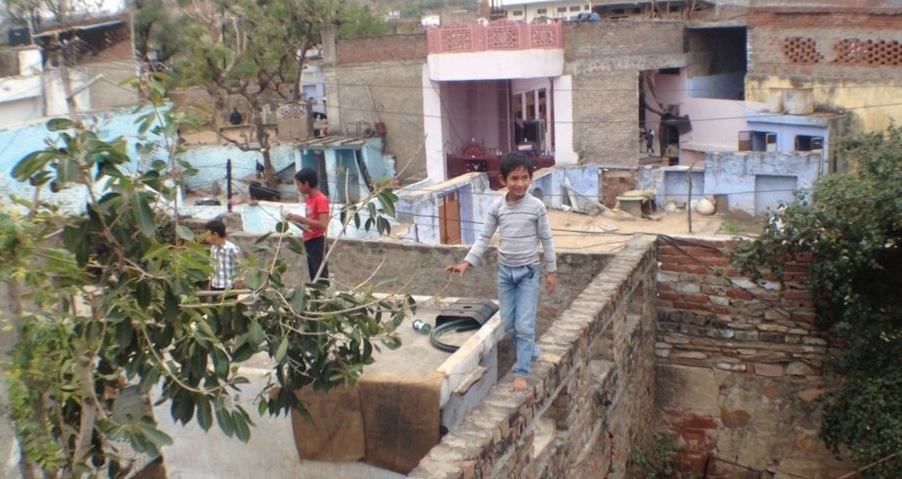 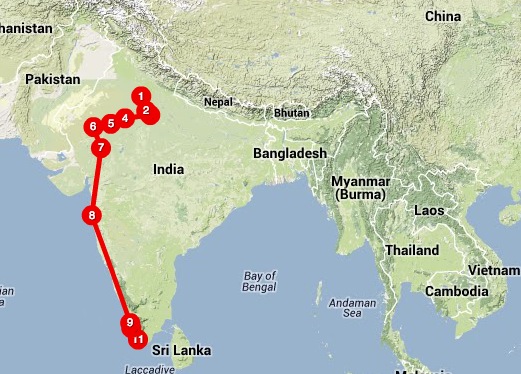